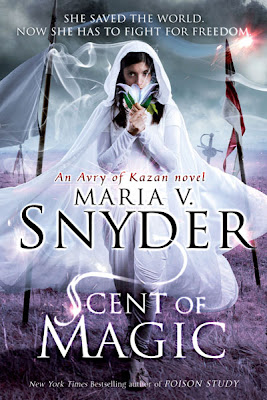 Avry of Kazan, the last Healer of the mystical Fifteen Realms, has a power that can't be matched. But in the minds of her friends and foe alike, Avry no longer exists.

Now, as the psychotic King Tohon builds an army mightier than any that has ever been seen before - a league of undead soldiers - Avry must face her toughest, most terrifying battle alone.

Fighting to be reunited with her family and her lover Kerrick, Avry must infiltrate Tohon's troops.

But does she have the power, the rare magic, to do what legend says is impossible?

Review:
After using her healing abilities to cure Ryne Avry came very close to death, in fact most of the world believe that she did die so she decides to use that to her advantage. Kerrick is the only one who knows the truth and Avry has sworn him to secrecy. While Kerrick must return to his homeland to rally more troops for the war against Tohon Avry heads straight into the danger zone determined to do what she can to train the soldiers to fight Tohon's army of undead. Neither of them are going to have an easy time of it, they will both face shocking betrayals and also find unexpected allies but can they survive long enough to meet again before Tohon really raises the stakes?

I absolutely loved Touch of Power so I had high expectations for Scent of Magic, I was nervous that Maria V. Snyder wouldn't be able to recreate the magic of the first book but I needn't have worried because I loved this second instalment just as much if not more. Everything I loved about the first book was continued in the second, we have fantastic world building, great characters, surprising plot twists and shocking events that took my breath away. My only disappointment was that Avry and Kerrick spent so much time apart during this book, I absolutely love the chemistry between them and the dynamics between them, Belen, Quain Loren and Flea was one of my favourite things about the first book so I missed that during this one. Even though I missed seeing the pair of them together I still enjoyed following their separate journeys and I could see why it was necessary for them to take different paths. It just made the time that they did spend together that much more special too.

We get to catch up with characters we know and loved from the first book but we are also introduced to a great selection of new ones. The story moves along at breakneck pace and was practically impossible to put down, I was so immersed in the world that I didn't want the book to end. Maria V. Snyder has a way of pulling me in and making me so connected to her characters that I feel their emotions right alongside them. Throughout the course of Scent of Magic I went through a rollercoaster of fear, worry, despair, grief, anger, shock, hope, happiness, relief and love. I had my heart broken and ripped into tiny little pieces one minute only to have it stuck back together the next. Shocking twists and betrayals kept me on the edge of my seat and have left me desperate to get my hands on the next book Taste of Death.

I'm sure that anyone who has read Touch of Power has been waiting to get their hands on Scent of Magic and I'm pleased to say that it was worth the wait. I wouldn't recommend starting the series with this book though so if you haven't read the first instalment then you need to do that immediately - this is a series that high fantasy fans will not want to miss.

Check out the awesome book trailer too: