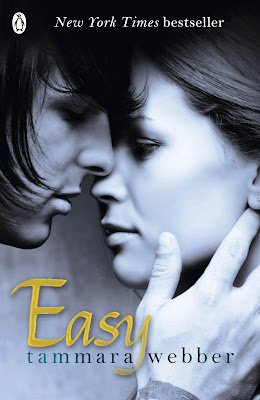 Easy is a New York Times bestseller - a must-read in the New Adult genre for everyone who loves Slammed by Colleen Hoover or Breathe by Abbi Glines. Deeply romantic and utterly gripping, Tammara Webber's Easy is not to be missed.

When Jacqueline follows her long-term boyfriend to college, the last thing she expects is a breakup. After two weeks in shock she wakes up to her new reality: she's single, ignored by former friends, and failing a class for the first time in her life.

Leaving a party alone, she is assaulted. Rescued by a stranger in the right place at the right time, she just wants to forget that night. But when her attacker turns stalker she has to make a choice: crumple in defeat or learn to fight back. Her saviour proves protective and intriguing, but he's hiding secrets of his own. Suddenly, knowing who to trust is anything but easy.

Review:
When Jacqueline follows her high school sweetheart, Kennedy, to the college of his dreams she thinks that they are the perfect couple but just months later he tears her heart out by breaking up with her and she falls into a deep depression. After two weeks of wallowing she knows it is time to start rebuilding her life again, she needs to start having fun and making new friends and she needs to catch up on her classes before she is kicked out of college. After a party one night she is attacked by someone she thought she could trust, saved by a stranger she just wants to forget about everything that happened but when her attacker starts making threats she realises that she has to stand up for herself. As she grows closer to the boy who saved her she begins to re-build her confidence but what kind of future can they have if she discovers the secrets he is keeping from her?

I'd heard a lot of great things about Tammara Webber's debut novel Easy so when I was offered a review copy I jumped at the chance of reading it. I have been loving the recent influx of new adult books and Easy is up there with the best that I have read. The author doesn't shy away from tackling sensitive topics such as attempted rape but she does it with sensitivity. The scenes where Jacqueline was attacked made for difficult reading, you felt her fear, shock and horror right along with her and I think most women will be able to identify how weak she felt because she was unable to fight her attacker off on her own. As horrific as the incident was Jacqueline was lucky that Lucas came along at the right time to save her. Unfortunately a lot of other women don't have a rescuer so one of the things I appreciated most was the way the author included tips on how to avoid getting into that situation. Yes, a lot of the things mentioned are pretty obvious when you think about it but I'd be willing to bet that most of us have put ourselves into a dangerous situation at some point in our lives (I know I did as a teen and probably even have as an adult), even if we were lucky enough not to have anything happen to us. Using common sense doesn't guarantee your safety but it does make it less likely you'll find yourself in Jacqueline's situation. I think it's important to raise the issue that rape isn't just something that happens amongst strangers, it could be the boy next door, your best friend's boyfriend or even the boy you are dating. Of course not all men are potential rapists but that doesn't mean women and girls don't need to be careful and aware of their surroundings. I also think that self defence classes are something that should be compulsory for teenagers - I wish I'd taken a class like the one Jacqueline joined. In fact, if I could find one locally I'd join it now!

As much as Jacqueline's attack was an important part of the story I don't want to make it sound like this was a depressing read because it really wasn't. It was about Jacqueline's journey to find herself, she had built her dreams around those of her boyfriend and when he dumped her she had to remember what she really wanted from her life. Jacqueline had her moments of depression but overall she was a strong woman and she refused to let her attacker intimidate her even after he started a campaign against her. The attacker was one of the most vile characters I've come across in a long time so I was pleased to see him get what he deserved. Another thing I loved was the fact that Jacqueline's best friend Erin was so supportive, she never once questioned that Jacqueline was telling the truth about her attack and she stood up for her friend even though it cost her. An important message to take from the book is that if you are attacked it isn't your fault, there is no such thing as "asking for it" and there is NEVER an excuse for anyone (male or female) to attack someone else. One of my favourite lines in the book was "I could blame the alcohol . . . but no. Alcohol removed inhibitions. It doesn't trigger criminal violence where there was none before." I think that was one of the most sensible things that Jacqueline said!

I can't write this review without telling you how much I loved Lucas, he was incredibly sweet and protective but at the same time he didn't want to smother Jacqueline - he wanted to empower her so that she was able to protect herself and I think that was what I appreciated most about him. Yes, he would do anything to save her pain but he wanted to make sure she was safe even when he wasn't around. The back story with Lucas just about broke my heart, he had been through so much and deserved to find happiness as much as Jacqueline did. I had guessed part of his secret fairly early on but that didn't spoil my enjoyment of the story in the slightest even though I was practically begging him to open up and tell her the truth.

In case you haven't already gathered Easy is a book that I would highly recommend to any fan of the new adult genre. Tammara Webber has a great writing style that will suck you in from the beginning and this isn't your standard romance. These characters are three dimensional and so real to me I felt like I was losing friends when I finished the book. I can't wait to get started on Tammara's Between the Lines series - I'm pretty sure I've found myself another favourite author!

Other Reviews:
Big Book Little Book
If you have reviewed this book on your blog please leave a link to your review in the comments & I'll add the link here.