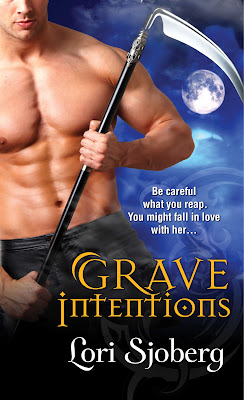 He’s handsome, reliable, and punctual—the perfect gentleman when you want him to be. But this dream man is Death’s best agent—and now he’s got more than his soul to lose…

One act of mercy before dying was all it took to turn soldier David Anderson into a reaper—an immortal who guides souls-of-untimely-death into the afterlife. But the closer he gets to atoning for his mortal sin and finally escaping merciless Fate, the more he feels his own humanity slipping away for good. Until he encounters Sarah Griffith. This sceptical scientist can’t be influenced by his powers—even though she has an unsuspected talent for sensing the dead. And her honesty and irreverent sense of humour reignite his reason for living—and a passion he can’t afford to feel. Now Fate has summoned David to make a devastating last harvest. And he’ll break every hellishly-strict netherworld rule to save Sarah...and gamble on a choice even an immortal can’t win.

Review:
David has spent the last 60 years working as a reaper, collecting souls and helping them find their way to heaven as a way to atone for the sins he committed before he died. The only souls who need the help of a reaper are the ones who didn't die of natural causes so he has seen the worst kinds of accidents and murders throughout the years. Every reaper has a different way of coping with the things they see and David's has been to close off all of his emotions. He doesn't let anyone close, not even his fellow reapers, and has become quite cold and distant. Everything starts to change when he meets his neighbour Sarah, something about her calls to him and makes him start to feel for the first time in years. But when opening his heart to love lets in all the negative emotions as well David isn't sure if he can cope with a relationship with Sarah. It's only the possibility of losing her that makes him realise how much he truly cares.

I don't seem to come across many stories about reapers but I've enjoyed all the ones I have read so I couldn't resist requesting a review copy of Grave Intentions from Netgalley. While it was an enjoyable story I did have a few problems with the mythology of the reapers. I really liked the idea that they were being given the chance to atone for their sins instead of being sent straight to hell, if they completed their penance they would be granted entrance to heaven but if they ever broke the rules or decided to quit their task then they would end up in hell. I'm all for the idea of redemption and felt that this was a really interesting idea that I hadn't come across in other books I've read about reapers. Where it fell down a bit for me was the sins that they committed to become a reaper and how long their punishment lasted, it seemed like the punishments were harsh and circumstances around their actions weren't taken into account. Perhaps that is the way it would work but it felt to me like we would end up with a huge number of reapers roaming about. I also felt it was strange that they were expected to live as normal humans, David rented a flat, he went out for drinks and meals but he had no paying day job and I'm not sure where he got his money from. Those are fairly minor issues but they did pull me out of the story on occasion and if this ends up becoming a series (which I hope it does because I'd like to see more of the other reapers that we were introduced to) then I'd like to see answers to some of those questions.

When it comes to the characters I found myself really liking David, he was doing his best to cope in difficult circumstances and I can't imagine how hard it must be to constantly be bombarded with the worst that humanity has to offer. It was no wonder he had become so jaded and sick of his task, especially considering he'd already been at it for 60 years! I liked the way he looked out for the other reapers though, especially his newest protege Adam. Adam definitely provided some much needed light relief and I'd love to read a book about him in the future. I wasn't so sure about Sarah, particularly in the beginning. I know I shouldn't be prejudiced but as soon as I found out she was a scientist that carries out testing on animals I almost put the book down, that is just something that makes me feel really uncomfortable but I know it won't bother everyone in the same way. I'm glad that I didn't immediately give up though because the animal testing was only really mentioned in passing once and was never discussed again or seen in any detail. Once I got past my issue with her job I found that Sarah was a nice woman, she was kind and caring but as much as she was likeable she never really stood out as particularly special.

Overall, I thought that Grave Intentions was an interesting story, it had a sweet romance but overall it was fairly predictable. It was a pleasant way to spend a few hours but it isn't the kind of book that I can see myself reading a second time. I will however be happy to pick up future books by Lori Sjoberg, considering this was her debut novel I will be interested to see how she expands on her world building and mythology in the future.