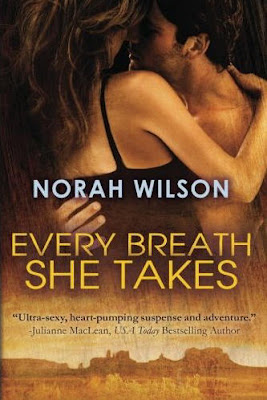 Veterinarian Lauren Townsend has good reason for hiding her psychic ability. Not only did her “freakishness” earn her pariah status in the small town where she grew up, it cost her her faith in love. When Lauren foresees a murder — through the killer’s eyes — he traces the victim to a sprawling ranch, never guessing what waits for her…

Cal Taggart’s rugged ranch life doesn’t need any more complications. But then beautiful Lauren enters his corral…with danger close behind. They can’t deny their intense attraction, but what begins as a fling with no strings becomes a fight for survival — and for true love.

Review:
Lauren has spent years trying to hide her psychic abilities so she isn't considered a freak by her friends and family. She has visions of murders but in the past she has never been able to see enough detail to save the life of one of the victims. This time she has been able to pin down a location and she is determined to prevent the murder from taking place. Taking an extended holiday from her veterinary practise she travels to the Foothills Guest Ranch in search of the victim. It is there that she meets ranch owner Cal. She is attracted to Cal but when she realises who the victim in her visions is she knows he has a motive and worries he might be the killer. Cal has been hurt in the past and is determined never to put his heart on the line again. That doesn't mean he is against the idea of having a little fun with his mysterious new long term guest though. As the pair grow closer Lauren comes nearer to figuring out the killer's identity but will Cal believe her when she shares her visions with him and can she stop the killer before she ends up becoming a victim herself?

Before I start this review I think it is worth pointing out that Every Breath She Takes was previously published with the title Lauren's Eyes - I just want to stop anyone making the mistake of purchasing this book twice thinking they're getting a new story when in fact they've already read it. This was actually my first book by Norah Wilson but I really enjoyed it and I'm looking forward to reading more of her work in the future. I don't read a great deal of romantic suspense but as I'm on a real contemporary romance kick at the moment I couldn't resist this one - especially when I found out that Cal is a cowboy and ex-rodeo star! Who doesn't love a sexy cowboy?

I have to say I really enjoyed getting to know Lauren, she was a strong heroine who saw horrific visions that were bad enough to give her nightmares but that never stopped her from putting herself in danger while she tried to protect the victim. Although she had figured out who was going to be killed not knowing when the murder would occur made it very difficult for her and she had to remain constantly on her guard while trying not to raise suspicion about what she was doing. It's not like she could tell the world about her visions and expect them to believe her when she had no proof that a crime would be committed. It was also hard for her to try and figure out who the killer was when she only ever saw the visions from his point of view but she was very logical in the way she went about her investigation and I liked the fact that she trusted her instincts. Once she had ruled Cal out as a suspect she never once questioned herself or doubted him which meant the way their relationship developed was very believable.

Cal was a great guy and someone who was prepared to go above and beyond to help those around him. He even offered his protection to the ex-wife who broke his heart by cheating on him. Although Cal was the kind of guy who looked out for others he didn't really believe that he had anyone who was willing to stand up for him. He had a support network but he just didn't see it and it took Lauren pointing out how much his friends cared before he really believed it. Cal's past left him wary and suspicious of others, especially women, but I liked the way he opened up towards Lauren fairly quickly. They both started their affair expecting it to be something short term but in spite of the secrets Lauren was keeping it didn't take long for them to grow to care for each other. Cal is a great alpha hero and I really enjoyed the glimpses of his life as a rodeo star.

My main problem with the story was that it was fairly easy to figure out who the murderer was, there wasn't a very big suspect pool so apart from one main red herring (that I had discounted fairly quickly) it didn't take a genius to guess the bad guy. In spite of that I still really enjoyed the story though and the climax at the end of the book was worth waiting for. There were a few frustrating misunderstandings between Cal and Lauren right at the end but thankfully they worked things out eventually. Every Breath She Takes was a solid story and one that has left me looking forward to more from Norah Wilson, it's a book I'm happy to recommend to fans of romantic suspense.