To celebrate the UK release of her debut novel The Lost Girl I'm thrilled to welcome British author Sangu Mandanna to the blog today to talk about her literary heroes and heroines! Before I hand over to Sangu I want to give you a bit more information about The Lost Girl, I'll be posting my review later today but this is a fantastic debut that is sure to appeal to dystopian fans. 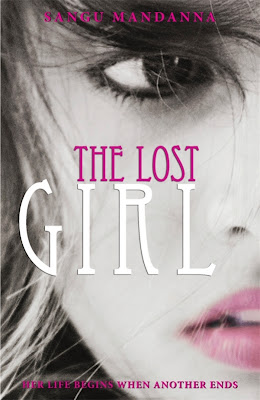 My name is Eva, I am an echo.
My time has come.

Eva's life is not her own. She is a creation, an abomination - and echo. Made by the Weavers as a copy of someone else, she is expected to replace a girl named Amarra, her 'other', if she ever died. Eva studies what Amarra does, what she eats, what it's like to kiss her boyfriend, Ray. So when Amarra is killed in a car crash, Eva should be ready.

But fifteen years of studying never prepared her for this. Now she must abandon everything she's ever known - the guardians who raised her, the boy she's forbidden to love - to move to India and convince the world that Amarra is still alive . . .

Now please join me in giving a very warm welcome to Sangu!

If you’re anything at all like me, by which I mean you’re writer and/or raging bookaholic, authors feature predominantly on your list of heroes and heroines you look up, wish you were more like or just plain adore. I have so, so many of these heroes, some from when I was little and some from as recently as last month. It’s been difficult trying to trim them down to a manageable number for this post, but I’ve done my best.

1. Mary Shelley
Not only do I owe Mary Shelley a huge debt for The Lost Girl, she is also astonishing. To us, in the relatively privileged twenty-first century, Frankenstein is a great piece of gothic horror and science fiction. But when you put the novel into the context of Shelley’s time and place, what she created is astounding. I would give a great deal to possess that kind of imagination.

2. JK Rowling
Another piece of imagination envy here. How does she do it? She creates the most absurd, strange and fantastic things. She’s invented a whole world that, quite frankly, I’d quite happily abandon this one for. But Jo Rowling is on this list for more than that. She’s here because she wrote her first novel in snatches, while looking after a baby and struggling financially, and she kept writing it and fighting for it, and I deeply, deeply admire that. (Not least because I find that writing with a baby in your life is so incredibly difficult!)

3. Arthur Conan Doyle
Because he created Sherlock Holmes. That’s all. And what better reason is there? When you invent one of the most memorable, iconic and long-lived characters of all time… well, you can’t ask for much more than that.

4. Daphne du Maurier
She has been on my list the longest, has clung to it like burr through many, many other fantastic authors and phases. I was ten when I read my first du Maurier and I never looked back. She does things with words that makes my writing look like the clumsy attempts of a toddler. It’s mind-boggling and beautiful and I only wish I could write like that.

5. John Green
Because somehow, no matter what he’s writing about, you remember his characters and you love them, long after the actual story and the details of the plot have been forgotten. He creates people that feel so utterly real it seems impossible to believe, when you’ve finished one of his books, that those people don’t actually exist.

6. Audrey Niffenegger
For The Time Traveler’s Wife. It is, still, my most favourite book in the whole wide world.

7. Melina Marchetta
Books like On the Jellicoe Road don’t come along very often. At least not for me. Melina Marchetta worked some kind of impossible magic and wrote a book that made me want to live inside it, that broke my heart and made me laugh in highly humiliating fits, that stitched layer upon layer of story and character so that when you step back it’s impossible to really describe what the book is about – you just have to live it for yourself. I want to write that kind of book someday.

8. T.S. Eliot
I’m not a person who reads poetry because I particularly enjoy it. But I am so in awe of a person who can tell a story through poetry, because I think that’s incredibly difficult (not least because interpreting it is incredibly personal to a reader) and, if the poet achieves it, the result is incredibly moving. Case in point for me: ‘The Love Song of J. Alfred Prufrock’. So Eliot is my favourite poet. (I’m sure the fact that a collection of his poems became CATS plays a not insignificant part in that choice, but hey.)

Who makes your list of literary heroes and heroines? And which of them has clung doggedly to that list the longest?

Thanks so much for a fabulous guest post Sangu, you've really got me thinking about my literary heroes and heroines! To be honest I have so many that it is really, really difficult to narrow it down to just a few. If I think back to childhood favourites I'd have to say Roald Dahl, Dick King Smith, Enid Blyton, Rudyard Kipling, Terry Jones & Lloyd Alexander were all authors I absolutely adored. Looking at more recent authors I'd have to agree with you on JK Rowling and I'd add in Maria V Snyder, Tabitha Suzuma, Jana Oliver, Lara Adrian & Zoe Marriott. I could extend this list forever though so I think I'm going to leave it at that for now, I'm sure I'll end up coming back and editing this post though LOL.

Don't forget to let us know who your literary heroes and heroines are - I'm always looking for books to add to my to read pile so I'm looking forward to seeing your suggestions!
at 09:00