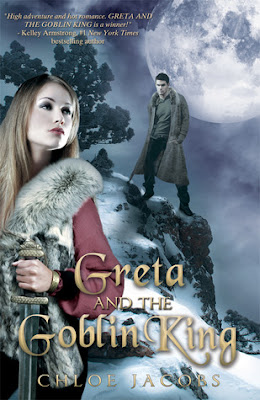 While trying to save her brother from a witch’s fire four years ago, Greta was thrown in herself, falling through a portal to Mylena, a dangerous world where humans are the enemy and every ogre, ghoul, and goblin has a dark side that comes out with the eclipse.

To survive, Greta has hidden her humanity and taken the job of bounty hunter—and she’s good at what she does. So good, she’s caught the attention of Mylena’s young goblin king, the darkly enticing Isaac, who invades her dreams and undermines her will to escape.

But Greta’s not the only one looking to get out of Mylena. An ancient evil knows she’s the key to opening the portal, and with the next eclipse mere days away, every bloodthirsty creature in the realm is after her—including Isaac. If Greta fails, she and the lost boys of Mylena will die. If she succeeds, no world will be safe from what follows her back...

Mylena Chronicles:
Greta and the Goblin King
Future titles and release dates to be confirmed

Review:
When Greta saved her younger brother from a witch four years ago she ended up falling through a portal into the world of Mylena. Ever since that day Greta has had to keep her humanity a secret knowing that if anyone finds out what she is they will kill her. Luckily she was taken in by a reclusive wood sprite, Luke, who has trained her to be a successful bounty hunter but her abilities have also caught the attention of Isaac, the goblin king, and he isn't exactly the safest person to have around considering he would have to kill her if he discovers her secret. Greta is desperate to find a way back home but she isn't the only one searching for a portal and it seems that she may hold the key to opening the way which has painted a very large target on her back. Can Greta help the other humans who are trapped in Mylena find their way home and is she really ready to leave Isaac behind?

I don't think I've come across another book where you have a goblin as a romantic lead before and that was one of the things that drew me to Greta and the Goblin King. I have to admit that I spent the whole book picturing Isaac as a dark haired version of David Bowie in the movie The Labyrinth (I guess that's probably showing my age!) and I don't think that was a bad thing, it certainly didn't take me long to warm to him! I think Isaac was actually my favourite character, yes he was arrogant, secretive and at times manipulative but at the same time he was protective, caring and incredibly sexy. Some of my favourite Isaac quotes included:

"You can put up walls, Greta, but sooner or later, I'll break down every last one. There won't be any secret you can keep or any part of you I don't know..." He leaned forward, his voice lowering to a whisper. "Intimately."

"Then how about because you challenge me?" he said. "You provoke me, excite me. Make me think about things I shouldn't think about, want things I thought would be impossible once I became king."

I only wished we got to see him and Greta spending more time together but I'm hoping that is something we'll get in future instalments. Greta was a kick ass heroine, she has spent years training to survive in the incredibly inhospitable environment of Mylena and has had to learn to keep her true identity a secret. She has to work harder than anyone else to make up for the fact that she is physically weaker but she does a very good job of not letting that show. As much as Greta is desperate to go home it is only when she gets closer to the possibility of leaving that she starts to realise that Mylena has become like a second home to her. She has spent so long learning to fit in there that in some ways it is more familiar than the world she left behind. It isn't going to be easy for her to decide where she really belongs.

Alongside Greta and Isaac we are also introduced to Wyatt and his gang of Lost Boys, other humans who were unwillingly transported to Mylena by witches. I found myself really liking Wyatt and the others but I have to admit that I wasn't impressed when the obligatory love triangle was introduced. I'm so over love triangles now and unless they are done really well or there is something unique about them I'm just not interested any more. I did enjoy watching Greta fight alongside the boys though and it was interesting to see how she grew as a character when she started feeling responsible for them.

Greta and the Goblin King was a solid start to the Mylena Chronicles and has left me looking forward to future instalments. The story has great action, interesting mythology (although I still have a lot of questions that I'm hoping we start getting answers to!) and a great love interest. I'm looking forward to learning more about the bond between Isaac and Greta and will definitely be keeping my eye out for the next book.