Review: Yours at Midnight - Robin Bielman 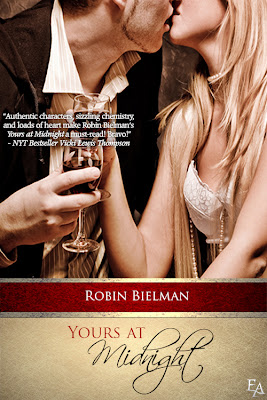 Lyric Whetsone only had eyes for Quinn Sobel's brother Oliver, until a car crash took Oliver's life on New Year's Eve. Then, a moment of shared grief between Quinn and Lyric became something more impassioned, something that frightened Quinn so much he ran from Lyric's bed and her life, disappearing for four long years.

Now Quinn's back for another New Year's Eve, struggling for closure, desperate to leave his grief in the past and make amends with the girl of his dreams.

But Lyric has a secret--one that could drive Quinn from her life forever. Will Quinn run away from the love and acceptance he's always wanted...or will he claim his New Year's kiss and make her his at midnight?

Review:
Quinn has been in love with Lyric for as long as he can remember but she was only ever interested in his twin brother Oliver. Then after Oliver tragically dies in a car accident grief pulls them together and they end up having a passionate one night stand. But Quinn was struggling to cope with the loss of his twin and he blamed himself for Oliver's death so he left town without a word. Four years later and Quinn has returned, he still has feelings for Lyric and wants to both gain her forgiveness and claim her heart but Lyric has a secret - one that could break Quinn's heart and end things between them forever.

Yours at Midnight starts just after Christmas and culminates on New Years Eve so it was the perfect book for me to read this week and made a nice story to end my years reading with. I have to admit that I'd guessed what Lyric's secret was before I even started reading the story but that didn't reduce my enjoyment in the slightest. Lyric is a strong character who you can't help but admire for the way she has made the best out of a difficult situation and built a good life for herself. I could understand why she initially kept her secret but I did find myself getting a little irritated with her for taking so long to open up to Quinn and I felt that he forgave her a little too quickly but that is to be expected in a fairly short novel.

I really liked Quinn, he has been in love with Lyric for so long but had to watch her daydream about his brother. He was so jealous of Oliver but that doesn't mean he didn't love him and he was devastated by his death. I really felt for him and was pleased that Lyric was able to help him get past the guilt he felt over the accident. I enjoyed watching them spend time with Lyric's family, her mother had some great advice for them both but I also enjoyed the friendly sibling rivalry and banter between her brothers and sisters. Yours at Midnight was an enjoyable holiday romance and I'm looking forward to reading more from Robin Bielman in the future.