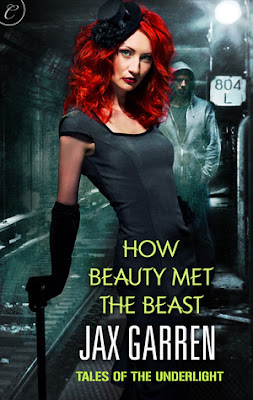 Scarred. Damaged. Living with a terrible secret. Agent of the Underlight Wesley "Hauk" Haukon has nothing left but the fight for liberty against the oppressive Order of Ananke. He's starting to lose hope…and then he sees her.

Despite her night job as a burlesque dancer, grad student Jolie Benoit has always played the mostly good girl. That all changes following a scorching sexual encounter with a stranger whose face she doesn't see. After she's kidnapped by thugs and rescued by a man with a very familiar voice, Jolie becomes a pawn in a struggle she never knew existed.

Hauk knows he cannot have her, and resolves to protect his heart and his secrets. But as they work together and grow closer, he finds new reason to keep fighting. Dare he risk hope in a new life, one where Jolie can see past his ravaged face and where their friendship can grow into something more?

Review:
From the minute I heard about How Beauty Met the Beast I knew I wanted to read it, I love fairytale retellings and a steampunk style Beauty and the Beast retelling with a heroine who works as a burlesque dancer had me intrigued! Unfortunately the story didn't live up to my expectations and I found myself feeling disappointed.

I'll start with the positives and the main one of those is without a doubt Hauk. Our beast in this story is an ex soldier who suffered from third degree burns on over 80% of his body when he was caught in an explosion while he was still in the army. The only member of his unit to survive the explosion he was later unfairly accused of causing their deaths and left the army in disgrace. Hauk is an honourable man though, one who fights for what he believes in and who has joined a covert group called Underlight who are working together to fight against the large corporate giants who are trying to rule the world. Hauk is confident when it comes to his job, he knows how to fight and he is good at protecting people but he has been left feeling very vulnerable about his looks. Since his accident he has found it hard to let anyone get close to him and he feels like no woman would ever look twice at him. I really loved Hauk, he was strong, sexy and alpha but he could also be surprisingly gentle and protective.

Jolie came from a wealthy family but rejected her inheritance to follow her dreams of becoming a dancer. I admired that about her until I discovered that her grandfather had left her enough money to be considered a very wealthy woman in her own rights. It's very easy to reject wealth when you have plenty of your own to fall back on and I just didn't get the feeling that she would have followed through if she didn't have that back up. That wouldn't have bothered me on it's own but her attitude just made her come across as very shallow at times and I found it really hard to like her. There were times when I was so angry at her for the way she treated Hauk, yes he had bad scaring but he had saved her life and I wanted her to ignore his looks and appreciate everything he had done for her. I'm sure that her feelings and attitude will change as the series continues (they even started to by the end of this book) but it just really irritated me in this instalment.

I was a little disappointed that the steampunk element to the story was so downplayed, as far as I could tell most of the story could easily have been set in our world, the only time the steampunk came into play was in the underground lair of Underlight. They refuse to use electricity (I'm still not sure why) and have some interesting steam powered devices but I wanted more details. I actually wanted more information about everything to do with Underlight, I still don't feel like I understand their full mission plan and exactly what their goals are. I was also left confused about the bad guy's, the Order of Ananke, I'm not sure what their goals are or why they seem to have magical abilities when nobody else does. Overall the world building just didn't feel finished and that let the story down. Again I think this will improve as the series continues but I think each part of a series should to be able to stand up on it's own and the world building is a pretty important hook to get people wanting to read the rest of the books.

I still haven't made up my mind about whether I want to continue reading the series or not. I would really like to see more of Hauk but there needs to be a serious improvement to the world or it's going to lose my interest pretty quickly.