Review: The Devil Inside - Jenna Black 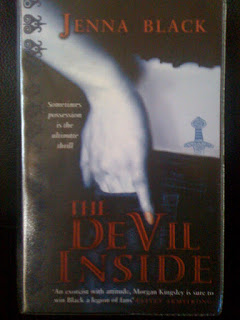 Possession.  Murder.  Mayhem.  Let the games begin...
Morgan Kingsley is an exorcist who precariously walks that fine line between heaven and hell.  She lives in a world in which demons co-exist with humans.  Normally hailed as heroes, these demons can heal, help, and make strong the willing hosts who gladly accept their corporeal possession ... unless a demon steps outside the boundaries of the law.  That's where Morgan comes in.  She is an expert at making rogue demons leave their unwilling hosts.

But now the unthinkable has happened: Morgan's got a demon of her very own sharing - and possibly overtaking - her body.  But this sexy beast is so enticing that he may tempt Morgan to re-evaluate her prejudice against demons - if he doesn't get her killed first.  For a war is brewing in the demon realm, and Morgan has just been forced to take sides...

Review:
Morgan Kingsley lives in a world where people willingly volunteer to become demon hosts.  The demons take complete control of their host's body giving it extra strength & healing powers but leaving the host a silent passenger in their body for the rest of their lives.  Understandably Morgan doesn't understand why anyone would volunteer for that position - in fact the idea of becoming a host is her worst nightmare!  She became an exorcist to remove illegal demons who attach themselves to unwilling victims.

The book starts with Morgan attempting what should be a standard exorcism but when something goes wrong the demon she is exorcising attempts to use her as it's host.  She manages to fight it off but is unable to understand why it was unable to attach itself to her.  After this incident strange things start to happen, she begins to sleepwalk - waking to find strange notes written in her handwriting but that she has no memory of writing.  Disturbingly these notes tell her that the demon couldn't attach itself to her because she has already been possessed.  But that can't be right can it?

Unsure if her mind is playing tricks on her but terrified that she might be possessed she is forced to investigate.  Soon she finds her worst nightmare has become reality and she doesn't know where to turn.  People she thought she could trust are acting strangely and it seems like the only people who can help her are demons which goes against everything she believes in.

I really enjoyed the story - it was different to anything I've read before and Jenna Black has created a realistic world with interesting characters.  I wasn't so sure about the S&M and M/M aspects of the book though - the only book I've read with S&M before was JR Ward's Lover Unbound (from the Black Dagger Brotherhood series) which I enjoyed but to be honest that part of The Devil Inside didn't really appeal to me.  It's hard to say why it bothered me more in this instance but it left me feeling uncomfortable which meant I didn't enjoy the story as much as I could have.  If you removed those elements I would have loved the book - there was plenty of action and intrigue and the plot was well thought out.  I'm just not sure if I want to continue reading the series or not though.  I already have the second book from the library so I will probably give that a try before making my mind up whether to continue further or not.

Other Reviews:
The Wayfaring Writer
Chrissie's Corner
If you have reviewed this book on your blog please leave a link to your review in the comments & I'll add the link here.