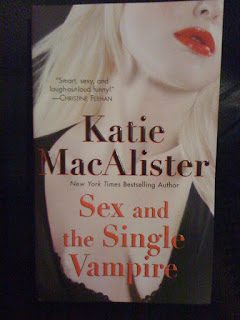 Allegra's Dictionary of the Paranormal
Dark One n. [Origin Czech, also known as vampire.]  A Moravian Dark One is doomed to spend his lifetime cruising the singles' scene in search of the one woman who can redeem his soul.  You think dating is hard?  Try it when you're nine hundred years old and you've used every pick-up line in the book.  Forming a lasting relationship is even more difficult when the woman who makes your heart sing sees dead people and likes to play with demons.

Summoner n. [Origin English.]  Someone who summons ghosts, poltergeists, and demon lords.  Summoners tend to hang around cities like London that are filled with portals to Hell, haunted inns, and other locations dishy vampires might be found lurking.  Most Summoners are female, which makes for difficulties when it comes to explaining to the man who haunts your dreams and fills your soul with love why your pet ghosts can be found hovering around even in the most romantic of circumstances.

Review:
I absolutely loved the first book in this series (A Girl's Guide To Vampires) but I have to say that Sex and the Single Vampire surpassed my expectations and was a fantastic read.  While you could probably get away with reading this as a stand alone book I would recommend reading the books in order as this continues very nicely from the first book & has guest appearances from previous characters.  Reading this book first would give you a big clue to the ending of the first book.

Allie is a Summoner but not a very successful one - in fact she is on a warning from her boss that unless she proves herself during this trip to London she won't have a job to come back to.  When she manages to Summon the ghost of a cat she is over the moon but before long she seems to be collecting ghosts left right & centre.  This may be fantastic for her career but unless she can work out a way to Release them into the afterlife it looks like she is going to be stuck with them.

She is also seeing visions - naked & bleeding from multiple cuts the man she sees is telling her she is the only one who can save him.  She is surprised when she bumps into Christian and realises he is the man from her visions.  He is a Moravian Dark One and he believes she is his Beloved - the only one who can save his soul.  Allie has had a bad past with men - she has escaped from an abusive relationship and has no intention of ever letting a man have any kind of control over her again.  The last thing she is looking for is a relationship & she doesn't take kindly to Christian's attempts to protect her.  There is an instant attraction between them though which leads to fireworks between them.

This book had all the hilarity of A Girl's Guide to Vampires & more.  We get to see Joy & Roxy from the previous book and the addition of the ghosts just adds to the fun and games.  There is also plenty of action - Christian's friend is missing and Allie offers to join the search to help find him - they come across enemies that seem almost impossible to beat and it will take all their combined efforts to come through this.  Allie is strong, independent & the Queen of rants and witty one-liners and I couldn't help but fall in love with Christian.  This book kept me gripped from the very first page and I didn't want it to end.  I'm just pleased that there are more books in the series & I can't wait to continue reading them.  I really can't recommend this book enough.