Review: Hard As It Gets - Laura Kaye 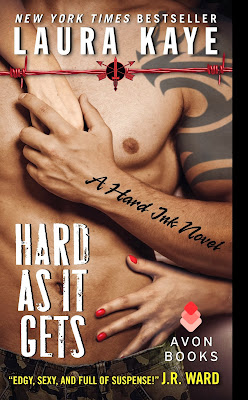 Trouble just walked into Nicholas Rixey's tattoo parlor. Becca Merritt is warm, sexy, wholesome — pure temptation to a very jaded Nick. He's left his military life behind to become co-owner of Hard Ink Tattoo, but Becca is his ex-commander's daughter. Loyalty won't let him turn her away. Lust has plenty to do with it too.

With her brother presumed kidnapped, Becca needs Nick. She just wasn't expecting to want him so much. As their investigation turns into all-out war with an organized crime ring, only Nick can protect her. And only Becca can heal the scars no one else sees.

Desire is the easy part. Love is as hard as it gets. Good thing Nick is always up for a challenge . . .

Review:
I'm a huge fan of Laura Kaye's writing style so I've been looking forward to reading her Hard Ink series ever since I first heard about it. Hard As It Gets is a great start to the series and it introduces us to five fabulous alpha heroes that I can't wait to spend more time with!

After a shocking betrayal that cost the lives of half of his team Rixey and his remaining four men were dishonourably discharged from the military. Since then Rixey has closed himself off from his friends and is trying to rebuild his life as a tattoo artist working alongside his brother Jeremy. When Becca comes to him asking for help locating her missing brother Charlie he turns her away, she is the daughter of the man who betrayed them all and cost him his career so the last thing he wants is to get involved with her or her family. Walking away isn't as easy as he expects it to be though and his honour won't allow him to leave Becca in danger with nobody to protect her. As he starts to investigate he realises that Charlie's disappearance might be linked to what happened to him and his men. If he can get the team to work together and rescue Charlie they may just be able to help clear their names in the process.

I have to say I liked Rixey immediately, I have a bit of a thing for military heroes so that's no surprise but throw in the fact that he's also a tattoo artist and of course I'm completely sold! I will say I was a little disappointed that the tattoo parlour doesn't play much of a role in the story BUT that isn't a major problem when you are given five ex-army hunks to drool over! I also loved getting to know Jeremy and really hope we're going to see his story at some point in the series along with the other team members. Rixey's team have had a rough time of it and things haven't been helped by the fact that they've spent the last year out of contact, it takes time for them to work out their issues but I loved the bond between them and the way they all have each other's backs. I'm definitely looking forward to getting to know them all better but I've already claimed Marz, his attitude to everything he has been through completely won me over and I'm positive he's going to be my favourite character.

Rixey is an incredibly protective guy, he looks out for his brother, his men and of course for Becca. He will do whatever it takes to keep everyone safe even if that means putting himself at risk. He has spent the last year in a holding pattern putting off making major decisions about his life and letting things pass him by but Becca coming to him for help forces him to start moving forward and take action again. For the first time in ages he feels like he has a purpose and that they might be able to get to the bottom of what happened to them and clear their names. It was good to see him start to be more proactive and to turn to his friends for help rather than push them away. Becca is a strong woman who copes well with everything that gets thrown at her. Her whole world is turned upside down but she takes most things in her stride and she was incredibly brave considering the circumstances. I loved the chemistry between the two of them, even with Rixey's reluctance to get involved with the daughter of a man he blames for everything that happened to them it was obvious he wouldn't be able to resist her for long. They make a great couple and I enjoyed watching them spend time together.

Hard As It Gets has everything I want in a romantic suspense - a great group of characters with a brotherly bond, a sexy hero and a heroine who is strong enough to stand up to him, action, mystery and suspense, an ongoing storyline that left me eager to continue the series but not screaming in frustration because of an evil cliffhanger and an adorable puppy who added humour to the story with it's antics. Laura Kaye is on to another winner with this series!

Source: Received from the publisher via Edelweiss in exchange for an honest review, I was also given a print copy of the book by Laura Kaye.