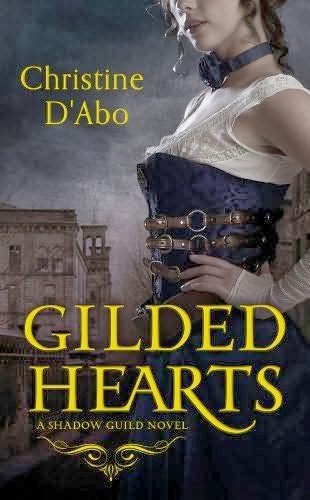 Samuel Hawkins, Sergeant in the King's Sentry, has been called in to investigate a murder case. As he awaits the Archivists to arrive—the team who will use a special device to extract the memories of the dead man to help find clues to his murder—he never expects to come face to face with the woman he'd left behind when he'd fled the Archives five years earlier.

Piper Smith has grown from the girl Samuel remembered into a strong woman and full-fledged archivist. Shadowed by her mentor, Master Ryerson, Piper will be performing her first extraction. When she sees Samuel, she must push aside her childhood crush, else risk her standing within the Guild.

As the two begin working together to find the killer, Samuel and Piper explore their intense attraction to each other. But "Jack the Ripper" proves to be harder to catch than the two originally thought. What's worse, they discover he may very well work for the Archives. Now, Samuel and Piper must battle internal and external threats as they try to foil a plot against the Crown and stop Jack the Ripper from taking his next victim.

Review:
When Samuel escaped the Archives five years ago the only thing he regretted was leaving his best friend Piper behind. He has made a new life for himself though and has worked his way up to Sergeant in the King's Sentry. When his work on a series of grizzly murders brings him back into contact with Piper he realises his friend has grown into a strong and beautiful woman and he is desperate to find a way to make her leave the Archivists Guild to be with him. Piper never forgave Samuel for leaving her, she couldn't understand his desperate need to escape and since he left she has thrown herself into her training to become an archivist. She knows that using her abilities will cost her greatly but with Jack the Ripper on a killing spree she has to do whatever she can to stop him taking more victims. Can the two of them work together to catch a killer before he strikes again and what will they do when their past catches up with them both?

I'm a huge fan of Christine d'Abo's erotic romances so when I found out that she was writing a steampunk series I couldn't wait to get my hands on a copy of Gilded Hearts. I loved the concept of the world she has created and I found the idea of the archivists very intriguing. They use their abilities to collect the memories of people who have died - usually only murder victims or important members of society - but when channelling the memories they also live through the experiences themselves. I can't imagine a job where you constantly have to relive horrific murders as if you were inside the victim while it happened so it's no wonder the archivists would go crazy if the memories weren't later removed. The memory extraction process was deliciously creepy and the story as a whole was a lot darker than I expected it to be. I liked the fact that the removal process wasn't completely accurate and often cost the archivist some of their personal memories too because it felt more realistic. It was hard to believe that anyone would choose to be an archivist but as you get to learn more about how the apprentices came to join the guild you discover that they were never really given much choice in the matter.

I found the world a really interesting one but unfortunately I struggled to understand the set up, there were a lot of times when I was left wondering why things happened a certain way or where I wanted a more detailed explanation. Although I found the way memories played a part in the story was really cleverly done I didn't like the fact that we got to see so many intimate memories belonging to complete strangers - those moments didn't seem to add anything to the story and just made me feel incredibly uncomfortable. I think it was partly my difficulties with the world building and those memories in particular that made it so hard to connect with either of the main characters. It took a long time for me to really start to care about them and become invested in the outcome of their story. I'm happy to say that things really started to fall into place for me in the last third of the book though and now that I'm getting comfortable with the world I'm more excited about reading the next book in the series. I think this series has a lot of potential and I'm hoping that things will continue to improve in Quicksilver Soul.