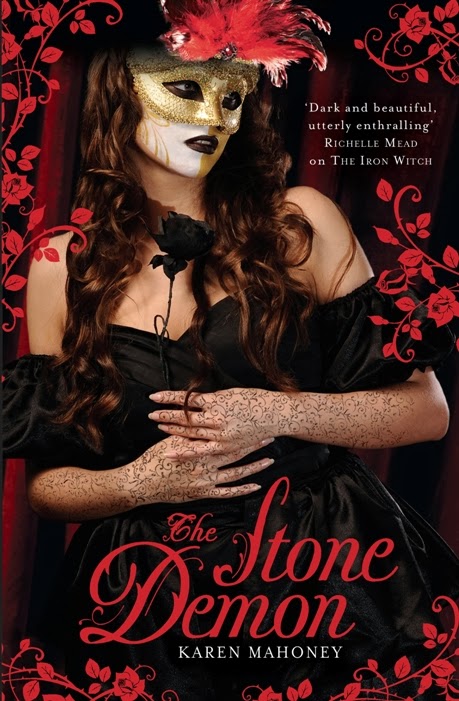 The just-unleashed demon hordes have delivered an impossible ultimatum to the Order of the Crow: produce the Philosopher's Stone, or suffer a deadly reaper storm of retribution. If Donna cannot recreate the mythical artefact, the world will be plunged into a devastating modern-day Dark Age.

Pitting her dangerously unpredictable powers against a vengeful demon king, two maleficent faery queens and an immortal magus with his own shadowy agenda, Donna must be willing to make the ultimate sacrifice. But, this time, death may not be enough . . .

The final, breathtaking story in the Iron Witch trilogy.

Review:
The Stone Demon is the third and final book in the Iron Witch trilogy so this review may contain spoilers for the first two books. The story picks up not long after the end if the last book and there is very little recapping so I really would recommend reading this series in order. Donna has been sent to London as a punishment for freeing the Demon King and his minions and is now continuing her training with the Order of the Crow. The Demon King has demanded that the alchemists hand over the philosopher's stone but the original was destroyed and they have been trying to recreate a new one for decades. Unfortunately their time is running out and if they don't find a way to stop the Demon King for good then the whole world is in danger.

I really enjoyed the first two books in this series so I was disappointed by the long wait between the release of The Wood Queen and The Stone Demon. I was excited to finally get my hands on this one but I have to confess that my enthusiasm for the series had died down a little during the long gap. As someone who reads a large number of books I'm really losing interest in starting series that haven't been fully released - it's just too hard to remember what happened in the first book if you've read over 200 new books in the year or longer gap between publication. Anyway, even though I've had this book for a while now it took me a long time to get around to starting it. Thankfully I found it quite easy to slip back into Karen Mahoney's world and it was good to catch up with Donna and see how she was getting on.

I was expecting big things from this book, a fast paced and action packed finale to the series that would see Donna face some incredibly difficult trials in order for her to keep her friends and family safe. Unfortunately while it delivered this to a certain extent I felt that things came too easily for Donna, she seemed to instinctively know how to solve things that the other alchemists have been working on for centuries and the way things fell into place so easily removed the sense of danger I was hoping for. I liked the story but I just didn't love it as much as I hoped I would.

The stand out character for the whole series has to be Nav and he stole the show in this book too. He added humour to the story and I loved the way he is such a good friend to Donna without expecting anything in return. We didn't see as much of Xan in this story as I'd expected to but I didn't really find myself missing him, in fact I just would have liked more scenes with Nav to make up for it. I don't think the romance was quite as prominent in this book as it was in the previous two and things were left quite open ended so I do wonder if the author will revisit these characters in the future. Even though this wasn't my favourite book in the series if you enjoyed the first two books then I'd say its definitely worth reading The Stone Demon so you can find out how the trilogy ends. I love Karen Mahoney's writing style and this was a quick and easy read that answered the majority of the questions raised throughout the series.