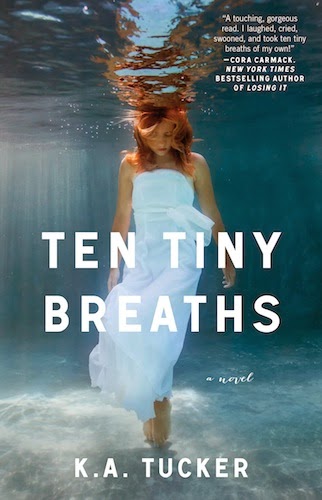 Four years ago, Kacey Cleary's life imploded when her car was hit by a drunk driver, killing her parents, boyfriend, and best friend. Still haunted by memories of being trapped inside, listening to her mother take her last breath, Kacey wants to leave her past behind. Armed with two bus tickets, Kacey and her fifteen-year-old sister, Livie, escape Grand Rapids, Michigan, to start over in Miami. They're struggling to make ends meet at first, but Kacey's not worried. She can handle anything - anything but her mysterious neighbour in apartment 1D.

Trent Emerson has smouldering blue eyes and deep dimples, and perfectly skates that irresistible line between nice guy and bad boy. Hardened by her tragic past, Kacey is determined to keep everyone at a distance, but their mutual attraction is undeniable, and Trent is desperate to find a way into Kacey's guarded heart - even if it means revealing an explosive secret that could shatter both their worlds.

Review:
Kacey's life was turned upside down when she was in a horrific car accident that killed her parents, her best friend and her boyfriend. She was the only survivor but it took her a long time to recover from the debilitating injuries she received and she has never been able to get over the emotional trauma. The only person she has left is her younger sister, Livie, who thankfully wasn't in the car at the time of the accident. Kacey and Livie were taken in by their aunt and uncle but their home life isn't exactly stable. Their uncle has already spent all of their inheritance but when he tries to climb into 15 year old Livie's bed it is the last straw so they pack their bags and run. Now they're trying to start over and build a new life where nobody knows them, Kacey will do whatever it takes to keep Livie safe but she won't allow anyone new into their lives - the risk of loving someone and losing them is too much to take.

Ten Tiny Breaths is such an emotional story and it hooked me in from the moment I picked it up. Kacey isn't the easiest person to like in the beginning, she is incredibly defensive and spends the whole time waiting for people to hurt her. She can be very sarcastic and quite sharp with people she doesn't know but when you find out about her past it is easy to understand why she has closed herself off from everyone. She is terrified of letting anyone new into her life in case something terrible happens and she ends up losing them - even the thought of making friends with Storm, the single mother in the apartment next door, scares her half to death. Livie is the only person she cares about and she works hard to keep it that way as a self defence mechanism. I loved seeing how much her character progressed throughout the story, she slowly starts to open up to the people around her and build a support network for herself and Livie. I really enjoyed the friendship between her and Storm and the fact that the two of them had each other's backs, Storm has a huge impact on Kacey and I always enjoy strong female friendships in my stories.

It was easy to fall for Trent, he is Kacey's other neighbour and he is friendly and helpful to the sisters from the very beginning. He is very supportive of Kacey and he takes his time to get through the emotional barriers she has surrounded herself with. It is obvious from very early on that he has a big secret but I have to confess that I didn't figure out what it was until just before it was revealed to Kacey. It was quite a shocker and definitely not something I was expecting! Trent had very good reasons for keeping things from Kacey and in his own way he was just as messed up as she was. One thing I really liked about this book is that starting a relationship didn't magically solve all their problems - they both have deep psychological issues that couldn't be fixed easily so it was great to see them get professional help in the form of counselling and medication. The fact that they sought out proper help made it much more believable that they could work through their problems and start to build a future.

I ended up really liking Kacey once she started to deal with her past and I enjoyed seeing how much she grew as a character, I think what I liked most was seeing her build relationships not just with Trent but also with Storm and other people she worked with. I loved Livie, she was only 15 but in a lot of ways she acted like the older, more responsible sister. Kacey did what she needed to provide for Livie physically but she wasn't really there for her emotionally which made things hard for her. It was great to see how the interactions between them changed as Kacey started to heal and I was glad that Livie was able to show her sister how much she needed her support.

Ten Tiny Breaths is an intense story, one full of pain and suffering but that also shows that it is possible to survive the worst that life can throw at you and come out the other side still fighting. It is a story about forgiveness, of yourself and the people who hurt you, and of finding a way to look to the future rather than living in the past. I can't wait to carry on with the series, especially since I discovered that One Tiny Lie is Livie's story!

Source: Received from Simon & Schuster's The Hot Bed in exchange for an honest review