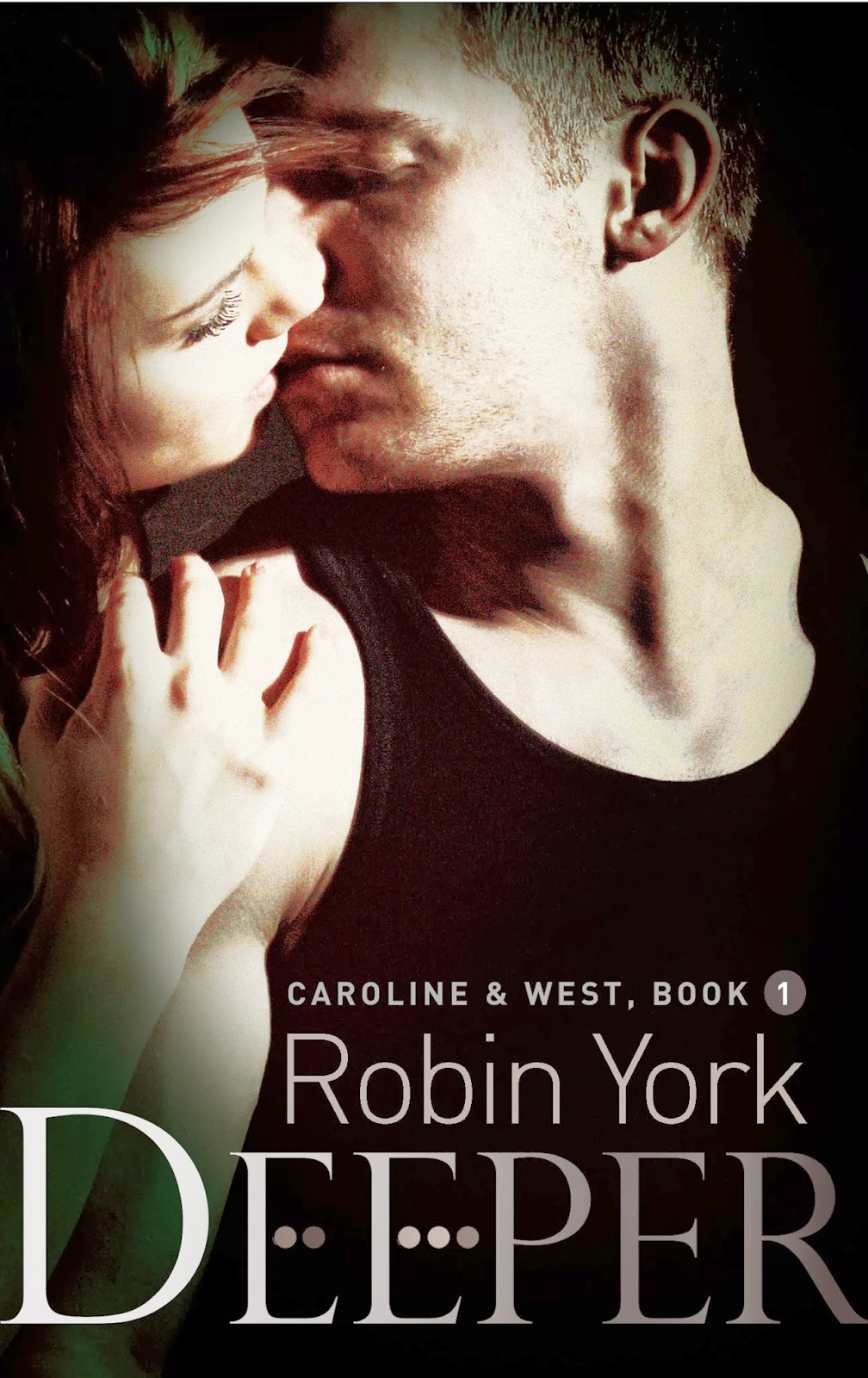 When Caroline Piasecki's ex-boyfriend posts their sex pictures on the internet, it destroys her reputation as a nice college girl. Suddenly her once-promising future doesn't look so bright. Caroline tries to make the pictures disappear. Then a guy she barely knows rises to her defence and punches her ex to the ground.

West Leavitt is the last person Caroline needs in her life. Everyone knows he's shady. Still, Caroline is drawn to his confidence and swagger - even after promising her dad she'll keep her distance. And on late, sleepless nights, Caroline soon finds it harder to stay away.

Though Caroline and West tell each other they're 'just friends', their feelings intensify until it becomes impossible to pretend. The more complicated her relationship with West get, the harder Caroline has to struggle to discover what she wants for herself - and the easier it becomes to keep the courage she needs to fight back against the people who would judge her.

Review:
I'm a huge fan of Ruthie Knox's adult contemporary romances so when I found out she was writing a NA novel under the pen name of Robin York I put Deeper at the top of my wish list! I'm so glad I did because Deeper is an unforgettable story, one that punches a hole in your chest and rips your heart out leaving you drowning in despair only to slowly put you back together again filling you with love and leaving you feeling hopeful by the end.

Caroline is just an average 19 year old student before her ex-boyfriend Nate sets out to destroy her. She is intelligent and focused on her studies, she knows exactly what she wants from life and she has spent years working hard to make sure she can achieve her goals. She has been in one serious, long term relationship with a boy she met at school, someone who she thought she was in love with and someone who she trusted would never hurt her. She wasn't happy about the pictures Nate took of her during sex but she wanted to make him happy and she was naive enough to trust that nobody else would ever see them. She thought their break up had been amicable, Nate was even happy to remain friends after she called things off with him and she was too embarrassed to check if he had deleted the pictures from his phone. It was weeks later when Caroline's world imploded - not only had Nate uploaded the pictures to multiple websites and sent links to all her friends and the entire student body of their college but he had also included her name and contact information. Since then she has been receiving anonymous threats by phone and email, she has been harassed by complete strangers and she has watched her dreams of becoming a judge wash down the drain. How will she ever get an internship if potential employers can google her name and find pictures of her naked? What will happen if the links get sent to her family and her dad or grandparents see them?

No matter what Caroline does to have the pictures removed they keep popping up on different websites and who can even guess at the number of people who might have saved them to their personal computers. She has lost all her confidence and everywhere she goes it feels like people are talking about her and laughing. She blames herself, after all she knew all along it was a bad idea to let Nate take those pictures in the first place and she never even asked him to delete them. She questions every tiny decision she makes from the clothes she wears to the places where she shops and the friends she hangs out with - how do you face meeting strangers when you know they could have seen you naked? How do you look your teachers or fellow students in the face after something like that? Caroline may be down but she refuses to completely fall apart, even when she's at her lowest she keeps struggling on - attending classes, doing her homework and scouring the internet for the pictures and doing her best to get them removed from every site she comes across. I can't even begin to tell you how much I admire her for doing that - I think if I'd been in her position I'd have hidden away in my room and never been seen again! It takes guts to go out and face the world with your head held high - especially when you're feeling so terrible about yourself and receiving such horrific threats on a daily basis.

West has known Caroline for a year now but they've never really been friends or socialised together. They may not be close but he despises Nate for what he has done and he is one of the few people to stand up to him on Caroline's behalf. West has a lot of problems of his own so the last thing he needs is the complication of getting involved with someone but he comes to Caroline's defence anyway, he just can't help himself. As the two of them spend more time together as "not friends" they slowly open up to each other and their feelings become more complicated. With West's help Caroline starts to rebuild her confidence, she has a few remaining friends who stuck by her through everything and she slowly starts to widen her circle and to trust in people again. It isn't easy to put her life back together but West convinces her that it wasn't her fault, that she was a victim and Nate is the one who should be punished.

I can't tell you how much I loved this book, Caroline and West's friendship develops so slowly into something more and it was beautiful to see them open up to each other. You'll be happy to know that there is no instalove here - instant lust absolutely but that's followed by friendship long before love gets involved. their relationship is just fantastic from beginning to end and I fell head over heels for West while I was reading! What I enjoyed most though was the way Caroline starts to put her life back together, the way West shows her that the only thing she did wrong was have faith in an arsehole who didn't deserve her trust. There was nothing shameful about having sex with her boyfriend or even in letting him take pictures - the shame lies with Nate for sharing something that was supposed to be private. I have to share my favourite West quote here:

"I think you need somebody to show you you're not broken, how you're beautiful and sexy and if you're dirty it's only in the good way, the way everybody is dirty."

Robin York does such an amazing job of showing the effect Nate's betrayal has on Caroline's life - from the harassment she receives from complete strangers, to the negative comments and slut shaming from people she thought where her friends right through to the embarrassment and disgust from family members. She also shows the positives to come out of it though - the way Caroline finds out who her true friends are, the people who will stick by her and support her no matter what to the way she finds the confidence to fight back and stand up for herself. Deeper is a beautiful love story with an important message to tell and it's one of my favourite reads of 2014. The sequel, Harder, is now one of my most anticipated upcoming releases and I absolutely can't wait to get my hands on a copy. I want to place a copy of this book in the hands of every teenage girl I know in the hope that it will stop just one of them making the same mistake that Caroline did. If you have a daughter then you should buy them this book!

Deeper by Robin York was published in the UK by Piatkus on the 6th of March and is £8.99 for the paperback. Make sure you check out the other stops on the UK blog tour (find the details in the banner below) 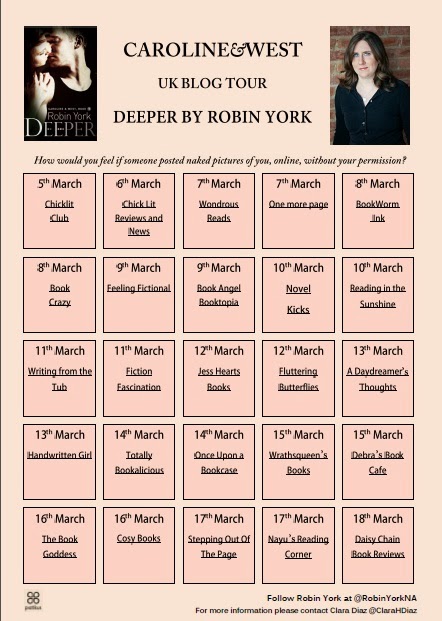