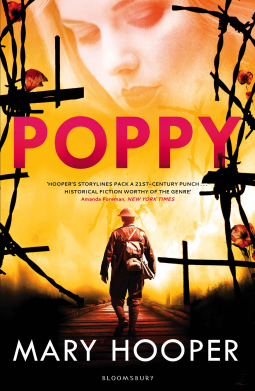 Poppy is young, beautiful and clever - and working as a parlourmaid in the de Vere family's country house. Society, it seems, has already carved out her destiny.

But Poppy's life is about to be thrown dramatically off course. The first reason is love - with someone forbidden, who could never, ever marry a girl like her. The second reason is war.

As the lists of the dead and wounded grow longer, Poppy must do whatever she can to help the injured soldiers, knowing all the while that her own solider may never return home . . .

Review:
I love Mary Hooper's writing, no matter what era of history she is introducing readers to you can always tell that she has done her research and she never fails to bring that period to life with her vivid descriptions. She always includes so many tiny little extra snippets of information that it really feels like you've stepped back in time and are walking alongside her main characters. As we are in the centennial anniversary of the start of WWI I was really looking forward to seeing how she would tackle the sensitive subject of the war, especially when I found out that it would be written from the perspective of a nurse who is looking after soldiers seriously injured on the front lines.

Poppy is a great main character, she's intelligent, hard working and kind and although she doesn't come from a wealthy family she is fairly happy with her lot in life. She had dreams of going to college and had even earned a scholarship but she had to take a position as a parlourmaid instead so she could help her family financially. In spite of that she isn't bitter and she focuses on making the best of her situation. 1914 was an interesting period of time for women. They were starting to stand up for their right to be treated as equals, to be allowed to vote and more women were looking to have a career of their own that didn't involve domestic chores or staying home with the children and in a lot of ways WWI gave them new opportunities that they didn't have before. With the majority of young men off fighting the war it was up to the women to step up and support them in whatever way they could - with everything from farming the land to working in offices or munitions factories through to nursing the wounded as they returned home.

Poppy was one of thousands of young women who signed up to the VAD (Voluntary Aid Detachment) to train as a nurse. She quickly finds herself working long hours to care for the overwhelming number of injured soldiers who were arriving every day. Mary Hooper doesn't shy away from showing what the soldiers went through and the horrific injuries that they suffered but it isn't just the physical injuries they had to cope with. This was a time before PTSD was a valid diagnosis and when doctors were only just starting to agree that Shell Shock was a medical condition and rather than just cowardice on a soldier's part. Just thinking about the things these men (or young boys in a lot of cases!) had to face on a daily basis makes my blood run cold and if they were too frightened to follow orders they faced the possibility of being put before their own firing squad for dereliction of duty. Weapons may have changed in the last century but a lot of the issues faced by the soldiers and the nurses caring for the injured is just as relevant today as it was then and I don't think it ever hurts for us to be reminded of that.

This book is a very quick read and I found that once I'd started reading it I didn't want to stop, in fact I pretty much read it in one sitting because I was completely gripped by the story. The timeline of this book runs through to the end of 1915 so it doesn't take us through to the end of the war and there will be a sequel publishing next year called Poppy in the Field but I wouldn't say this book ends on a cliffhanger. It ends at a very natural point so although I'm looking forward to continuing to follow Poppy's journey I'm not frustrated with the way this book ended. History is so often written from a man's point of view, there are countless stories told from a soldier's perspective so I really appreciated that this focuses more on women's efforts at helping the war effort. This book shows the incredibly resiliency of both men and women at the time of WWI and I think it highlights all the best qualities the war brought out in our country even while it shows the horrors that so many thousands of people experienced.