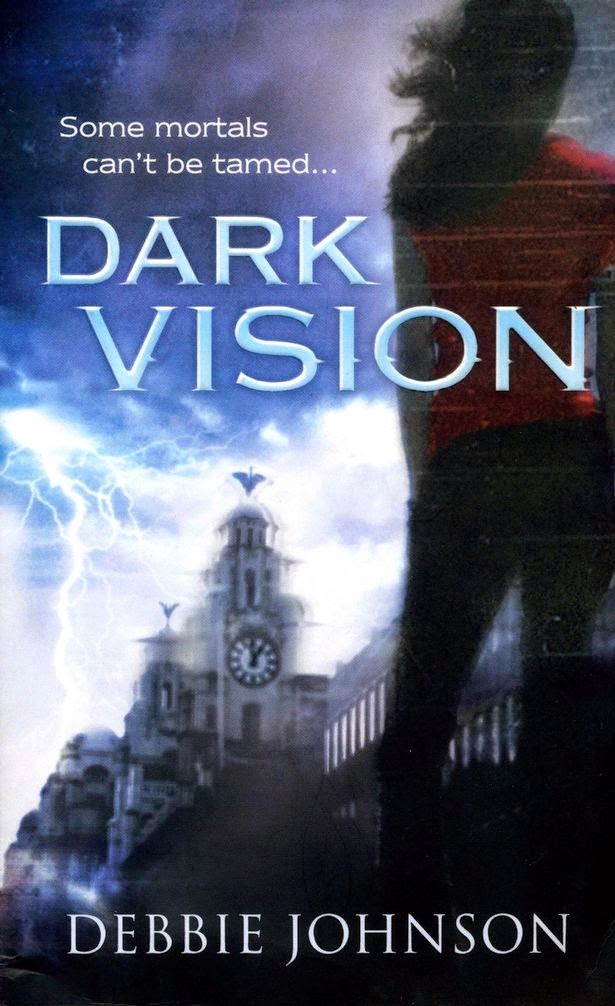 With just one touch she can see a person's future, whether it's a good fortune or a terrible fate. Afraid of the potent visions she foresees, she distances herself from the world, succumbing to a life of solitude.

But the touch of a mysterious stranger - who has powers of his own - Lily sees a new, chilling future for herself: one where she is fated to make a terrible choice . . .

Review:
As soon as I heard about Dark Vision I knew I wanted to read it. I'm a huge urban fantasy fan, it's been one of my go to genres for years and most of my favourite series fall into this category. It's a very US dominated genre though, not that I don't love series set in the US but it does make a nice change to find a book set in the UK since they are so few and far between. Dark Vision isn't just set in the UK, it's also set in Liverpool which is even better - it's nice for me to get that British feel but still be able to travel somewhere I've never been before!

So, I had high hopes for this story but while I liked it I didn't find it wowed me as much as I hoped it would. To start with the positives the Dark Vision has an interesting mythology and it combines all kinds of supernatural creatures and different abilities. It has a very British feel to it and I enjoyed the humour that was scattered throughout the story. The world definitely has a lot of potential and since I believe that this is the first book in a new series (I was unable to find confirmation of that fact) I would definitely be keen to read more books by Debbie Johnson in the future.

I also found Lily's abilities very interesting, she only has to brush up against someone and any skin to skin contact will result in a vision. Lily can't control the visions she sees but they very often show the other person's death or something horrible that they will have to go through in the future. Since Lily has no way of blocking her ability the only way she has been able to control her visions is to avoid touching anyone. As you can imagine having to keep people literally at arms length is not only very difficult but it also leads to a very lonely life for Lily and because of that she's always had trouble making friends. The one person who has broken through her defensive barriers is Carmel and I loved the supportive friendship they have. Too often any other female characters are only there as rivals for the heroine and that definitely isn't the case here.

I was intrigued by Gabriel from the first moment Lily meets him, he's definitely got that mysterious vibe going for him and although you know he is keeping secrets you get the feeling he's got her best interests at heart. What irritated me was the way Lily reacted to him, I could understand her being wary of him, in fact I liked that about her at first, but after he'd saved her life it didn't make sense that she kept refusing to follow his instructions or accept his help. It made even less sense that when she starts hearing voices she immediately trusts a complete stranger - especially one who actually admits he was the one who put her in danger in the first place! Surely if you can't trust the guy who SAVED YOUR LIFE then you're not going to trust the man that WANTS YOU DEAD? Because of her misplaced trust and her refusal to do anything that Gabriel suggests will help keep her safe she is constantly putting herself into danger. I might have forgiven her once but time and time again she ignores advice and puts not just herself but also all of her allies at risk. I find it hard to respect a heroine who acts like such an idiot.

Lily does come a long way by the end of the book though, she makes progress on starting to understand her abilities and she starts to accept the things she has learnt about her destiny. As much as she irritated me for a large chunk of the book I'm fairly confident that she will learn from her mistakes and think before she acts in the future. I have high hopes for the potential romance between her and Gabriel but I really hope that the potential triangle with Luca doesn't continue past this book. So, while Dark Visions may not be perfect it was still a likeable read and if it does turn out to be the first book in a new series then I'll definitely be picking up the next book to see what happens to Lily next.