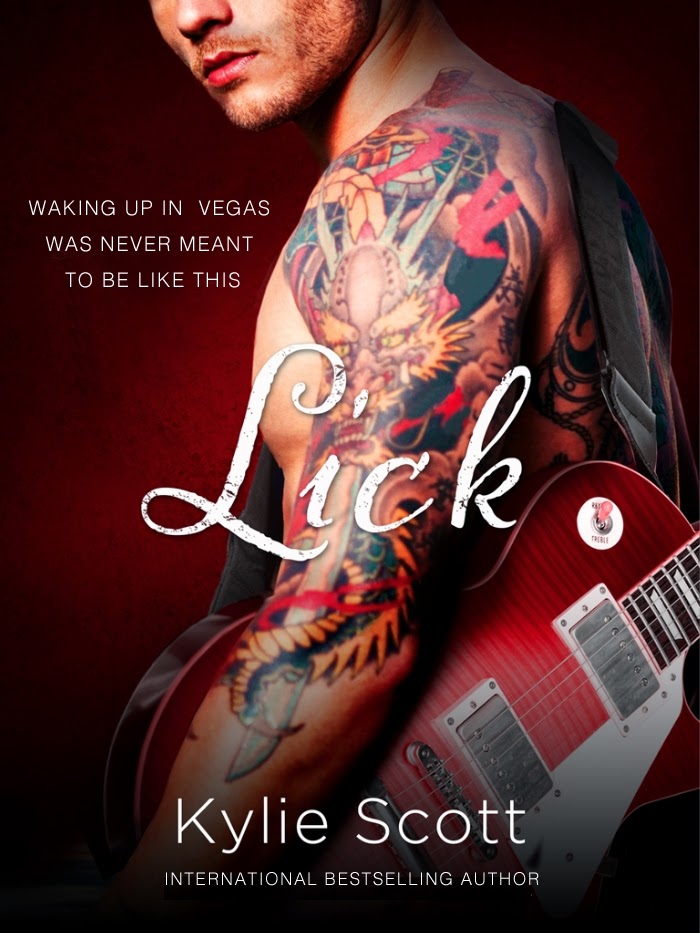 Waking up in Vegas was never meant to be like this.

Evelyn Thomas's plans for celebrating her twenty-first birthday in Las Vegas were big. Huge. But she sure never meant to wake up on the bathroom floor with a hangover to rival the black plague, a very attractive half-naked tattooed man in her room, and a diamond on her finger large enough to scare King Kong. Now if she could just remember how it all happened.

One thing is certain, being married to one of the hottest rock stars on the planet is sure to be a wild ride.

Review:
Ev may have planned a wild weekend in Vegas but the last thing she expected was to wake up in a stranger's hotel room only to discover that she's married to a rock star! Things like that just don't happen to normal girls like her and she has no memory of how she got into this situation in the first place. Her first thoughts are to get the marriage annulled so she can get back to reality but you don't marry one of the world's hottest rock stars without getting unwanted attention from the media. Ev finds herself sucked into a storm of negative publicity and the only person who can protect her from it is her new husband David. What they need to work out is whether their whirlwind romance can turn into something that could last forever.

I love rock star romances, they're one of my guilty pleasures and I can never resist them. Come on, who doesn't enjoy daydreaming about sexy, tattooed rock gods? As much as I love this genre I do find I'm a little tired of the band members who act like assholes, you know the type I'm talking about - the ones who do nothing but drink, take drugs and party and who expect women to fall at their feet and worship them? Yes, they're always redeemed by the love of a good woman but I'm still a little bored of that trope so I can't tell you how much I enjoyed the fact that David is a really nice guy. He's rich, famous and incredibly successful but he doesn't feel the need to treat others like crap to prove his superiority and he's actually really sweet and caring towards Ev. He does have a bit of an attitude problem in the very beginning because he's hurt that Ev wakes up after the best night of his life and doesn't even know who he is let alone remember agreeing to marry him. I could understand how painful that would be though so I found it fairly easy to forgive his initial reaction once he'd calmed down and started to act like his normal self again.

Ev is just a normal girl, someone you can easily picture yourself being friends with and she doesn't put up with any of David's attitude. She knows what she wants from life and has her entire career all mapped out so the last thing she needs is David coming along and mixing everything up. Well, that's what she thinks anyway but it soon becomes clear that perhaps her plans aren't quite as important as she though they were. I really enjoyed seeing these two spend time together, they have great chemistry but their connection runs deeper than just lust and they actually spend time together talking and having fun. You get the impression that they have a good chance of making things work long term which I really enjoyed. There are some misunderstandings toward the end that were a tiny bit frustrating but it was good to see them talk things out and come up with a solution.

Lick is a fairly short book and there were a few scenes that I would have loved to have been fleshed out more but I still thoroughly enjoyed the romance between Ev and David. It isn't all sunshine and roses - their love is much more realistic than that - they both make mistakes, they both get hurt but they also talk to each other and work through their differences. As much as I loved David I have to admit I have a huge soft spot for fellow band member Mal, he really did steal the show for me and I couldn't get enough of the scenes with him in it so I'm incredibly excited to discover that he is the star of the next book. This is a series that I'm very much looking forward to continuing and Kylie Scott is definitely going to be an author I'll be watching in the future.