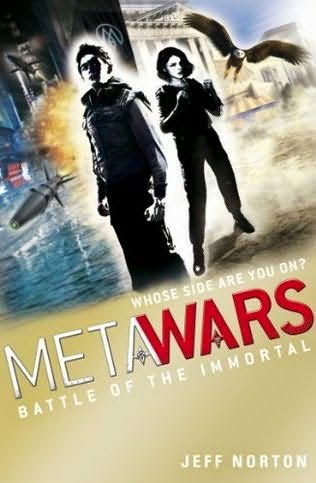 The Uploaded have crossed over into the real world. Now the fight for control of the online Metasphere and the offline world has become a savage battle between virtual and reality.

Jonah Delaxroix is on a mission to save the Metasphere, but as allegiances change again and again he faces a terrible choice: rescue his own Uploaded father, or make the ultimate sacrifice.

The third book in the awesome METAWARS series.

Review:
Battle of the Immortal is the third book in Jeff Norton's Metawars series and the stakes are higher than ever for Jonah. As much as he is happy to have his father back in his life he knows that it is wrong that Jason has stolen Luke's body and that moral dilemma plays on his mind as more and more of the Uploaded escape the Metasphere by usurping the living. He is also torn between the Guardians and the Millennials over who should have control over the Metasphere and what lengths they should be prepared to go to to achieve their goals. I really don't envy Jonah the choices he has to make in this series, he often finds himself in situations where there isn't really any right answer and he can only try to choose the path with the lowest number of casualties. He is also starting to realise that the consequences for his previous actions have had much further reach than he ever could have imagined and that perhaps some of his choices have caused more harm than good.

No matter how tough things get Jonah remains true to himself though, he always tries so hard to protect not just the people he loves but also other innocent lives that are in his radar. He's the kind of friend that anyone would want at their back because no matter how much it costs him he will always try to keep you safe. This is shown more clearly than ever when Sam ends up being usurped by one of the Uploaded. Jonah has to make some frightening choices in his quest to save her, including allying himself with someone he has always considered an enemy. We really start to see Jonah grow up in this instalment to the series, he is starting to be more proactive in his choices and to think of the long term effects of his actions rather than just flying by the seat of his pants like he has done in the past. We're seeing him turn into a young man who is wise beyond his years but it has cost him a lot to get to where he is now.

I don't want to say too much about the actual plot because it's more fun for you to discover that for yourselves but I'm sure that fans of the first two books will love this one just as much. This is the kind of series that has so many layers to it so no matter how much fun it is reading about a world where virtual reality is almost as important as real life that is only the beginning. Jeff Norton encourages readers to think about the differences between good and evil and how the line between them isn't quite so black and white. There are times when the good guys to terrible things and it's up to you to decide if they are ever justifiable or not. I'm kind of sad to know I've only got one book left to read in this series but I'm still excited to read The Final Frontier so I can find out who wins the war and finally discover whether the ends justified the means.