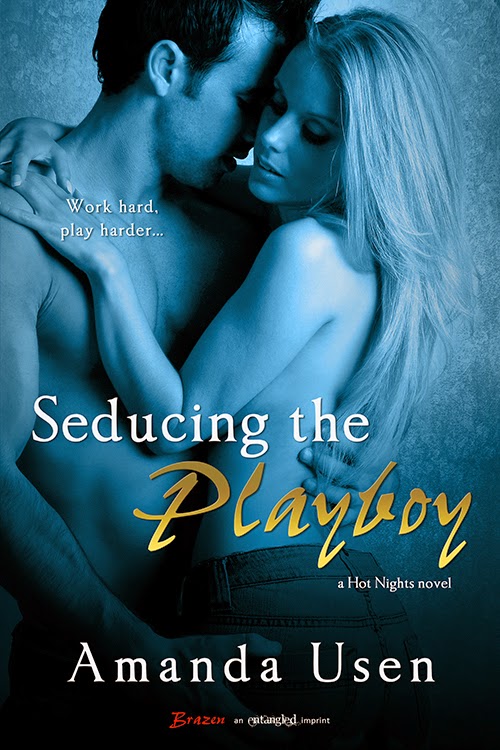 The best desserts are worth the wait…

Pastry chef Jenna Cooper crushed hard on playboy chef Roman Gallagher when her older brother brought him home to share their family Christmas six years ago. Now she’s old enough to do something about it, and she won’t take no for an answer—for anything.

Out of the frying pan into the fire…

Roman has one hard and fast rule—don’t sleep where you eat. But he can’t say no to Jenna’s plea for him to help her save her family business. Soon she's working for him, and their scorching chemistry melts Roman’s resistance.

If you can’t stand the heat…

Jenna knows Roman has reservations about enjoying the heat between them, but she’s got a plan. She’s going to keep this sexy man so satisfied in—and out—of the kitchen, he won’t regret a thing. But Roman has his own ideas. He wants more than a few hot nights, and he's going to teach Jenna a lesson about playing with fire.

Hot Nights Series:
Into the Fire
Seducing the Playboy

Review:
Jenna is desperate to save her family's restaurant and the only person she can think of to ask for help is her brother's best friend Roman. Roman is a top chef and an expert at building up new restaurants but he is also the man she's had a crush on since she was a teenager and now she has an excuse to spend time with him she's planning on doing her best to seduce him. Roman wants Jenna more than anything but he knows she's far too good for a playboy like him and although the chemistry between them is fantastic he is determined to take things at his own pace. Working closely together makes it hard for them to avoid giving in to temptation though and Roman starts to wonder if his relationship with Jenna could be more than just a fling.

I have to confess that when I requested a review copy of Seducing the Playboy I didn't realise it was the second book in a series and I probably wouldn't have read it if I'd known that in advance because I'm a bit OCD when it comes to reading books in the correct order. Thankfully Amanda Usen has done a fantastic job of making this story work as a stand alone and although I'm now definitely planning on getting hold of a copy of Into the Fire asap I didn't find myself at all confused reading this story. Having read the blurb of the first book I actually think that the two stories cover the same period of time so I don't think it really matters which one you read first.

I really enjoyed this story, it's everything I look for when I'm picking up a book from the Brazen line - great characters, believable romance and fun sexy times. I found both main characters very easy to like, I enjoyed the fact that Jenna knows what she wants and will do anything to achieve her goals. She refuses to back down from a challenge and she doesn't let anyone get away with treating her badly. Roman is sexy as hell but he can be kind of grumpy so he needs someone who is going to call him on it when his attitude is bad. Although the attraction between Roman and Jenna is intense he actually keeps her waiting a long time before he agrees to do more than kiss so this book is all about delayed gratification but there are some fab kissing scenes and Roman certainly knows how to follow through after such a long build up!

Seducing the Playboy is fairly predictable but I could say the same about most contemporary romances so the thing I'm most interested in is whether the characters are likeable and how much fun I have reading them. This book hit the right spot on both of those points and has definitely left me wanting to read more from Amanda Usen in the future.