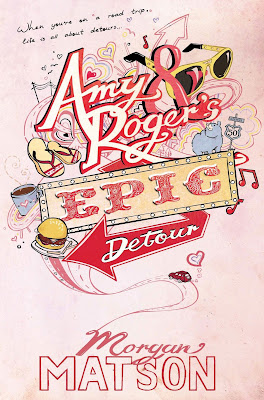 Amy Curry's year sucks. And it's not getting any better. Her mother has decided to move, so somehow Amy has to get their car from California to the East Coast. There's just one problem: since her father's death Amy hasn't been able to get behind the wheel of a car. Enter Roger, the son of a family friend, who turns out to be funny, nice . . . and unexpectedly cute.

But Roger's plans involve a more "scenic" route than just driving from A to B, so suddenly Amy finds herself on the road trip of a lifetime. And, as she grows closer to Roger, Amy starts to realise that sometimes you have to get lost to find your way home . . .

Review:
Amy's family has fallen apart since her father was killed in a car accident. Her brother turned to drugs and alcohol and is now in rehab, her mother is desperate to get away from the memories and is determined to move to the other side of the country and Amy is just trying to get through one day at a time. She feels disconnected from her old life, is unable to open up to her friends and she blames herself for her father's death. The last thing she wants to take a five day road trip, especially when just the thought of getting in a car sends her into a panic. Even worse is the fact that she will be driven by the son of her mum's friend, she hasn't seen Roger for years and is dreading the thought of being in a confined space with a complete stranger. Roger isn't too keen on the idea either and the last thing he intends to do is follow the strict route that Amy's mother has planned for them, if you're taking a road trip you can at least make an adventure out of it.

I was talking with several other bloggers about road trip books and Amy & Roger's Epic Detour was one that came highly recommended by everyone who had read it so of course I had to read it. As a Brit I'm fascinated by the idea of doing a road trip across the US. I actually find it hard to comprehend the distances people travel in America to get from one side of the states to the other though. To put it into perspective for my US friends we can travel from Land's End (the very bottom of England) to John o' Groats (the very top of Scotland) in less than 16 hours and that is the furthest you can drive in a straight line before hitting water at either end of the journey! The trip that Amy & Roger take is probably three times that distance and they complete it in about a week which I think is pretty impressive when only one of them is driving (I consider the 5 hours it takes to get from London to Devon a long journey LOL!). Anyway, I absolutely loved getting to take this trip with them, Morgan Matson describes the scenery beautifully and the little hints about good places to stop for food or must see tourist sites made me desperately want to book flights, hire a car and follow in their footsteps!

Amy and Roger start out as complete strangers who are reluctant to be spending so much time together but as they get to know each other they realise how much they have in common and begin to open up to each other. I loved the way their friendship slowly develops into something more, it all happens at a realistic pace and never once felt forced or rushed. With Roger's help Amy starts to overcome her anxiety issues and remember the girl she used to be before her father's accident, she will never be quite the same but she really does start to face her problems head on instead of burying them away. I'll admit that I was a little worried about Roger's stalker potential in the beginning. The way he was constantly trying to call his ex-girlfriend even though she was obviously ignoring him came across as a little creepy but thankfully his behaviour doesn't carry on for too long as he starts to realise how wrong they were for each other. He really grew on me as I got to know him better and I loved the way he was so patient and understanding with Amy, he really did help her come to terms with her father's death and she desperately needed a friend who was able to make her open up about what had happened to him. They actually make a really sweet couple but their romance doesn't take over the story and the focus is much more on friendship, family, growing up and forgiving yourself.

One of my favourite things about the book was all the little added extras that are included. As they travel Amy keeps a journal full of photos, postcards, receipts, playlists, drawings and much more and these pages are re-created throughout the book helping to make the story come to life. I loved the fun facts that she writes about each of the states they travel through and I actually ended up getting out a map so I could see exactly where they went. This was definitely one of my favourite road trip books so I can understand why all my friends recommended it so highly. If you're looking for a coming of age story, a fab road trip book and a really sweet romance all rolled into one then you can't go wrong with Amy & Roger's Epic Detour. This is definitely one for my keeper shelf and I'm already looking forward to reading Morgan Matson's next book Second Chance Summer!