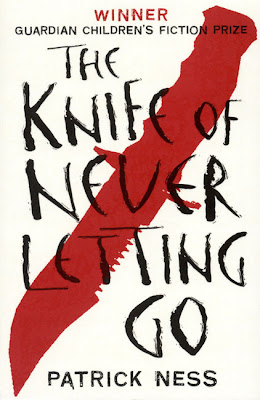 Todd Hewitt is the last boy in Prentisstown.

But Prentisstown isn't like other towns. Everyone can hear everyone else's thoughts in a constant, overwhelming, never-ending Noise. There is no privacy. There are no secrets.

Just one month away from the birthday that will make him a man, Todd unexpectedly stumbles upon a spot of complete silence.

Prentisstown has been lying to him.

Review:
The Knife of Never Letting Go is one of those books that I was embarrassed to admit I'd never read, its a book that has been recommended to me time and time again and is incredibly popular with all the other YA bloggers I know. I've actually had the book on my to read pile for a few years now but I was kind of intimidated to start it, you know how it can be with those books that everyone loves where you're afraid that you'll be the only person not to like it? That's exactly how I felt about this one but I thought it was about time I pushed past the nerves and gave it a try. I'm glad I did because I now know what all the fuss is about and I can see why everyone raves so much about this series.

I'll admit that it took me a couple of chapters to get used to the writing style, Todd has a distinctive voice and that is shown partly through misspellings and strange word usage. That is something that would normally drive me insane but that actually felt right in this instance and it just added more colour to the story. Todd is a great main character, a young boy of not quite 13 he is on the cusp of adulthood and he is eager to be seen as a man rather than as a child. He lives in Prentisstown, a town with only mail inhabitants where everyone can hear each other's thoughts in a constant "Noise" that is enough to drive you insane. Even the animals speak although they don't always have a great deal to say! I can't even begin to imagine living in that kind of chaos, I have enough trouble turning off my own thoughts sometimes let alone trying to shut out everyone else's!

The story starts with Todd walking in the swamp with his dog Manchee, it's a pretty normal day until he stumbles across an area of complete and utter silence. Todd has never encountered anything like it but he instinctively knows that it is dangerous and something he must keep secret. From that moment on Todd's life is turned upside down and he will realise that everything he has ever been told about the "Noise" and where it came from is a lie. Todd is forced to run from his family and his home but he has no idea if he will ever be able to find a safe place to stay. The Knife of Never Letting Go is a coming of age story, one that is going to push Todd to his very limits and then shove him even further. There were times when I absolutely hated some of the things that he did but even when it was hard to watch his actions I could always completely understand what had brought him to that point. He does a lot of growing up throughout the book as he learns the truth about his past and I think he is growing into an admirable young man.

I don't want to say too much about any other characters because it would be too easy to give spoilers but I will tell you that I think Manchee was my favourite. It was just so funny to listen to his thoughts and I swear if dogs could actually talk they would sound just like him. As well as adding humour to what at times was quite a dark story Manchee was a much needed friend and companion for Todd. There was so much loyalty between them and even though Manchee irritated Todd at times you could tell that deep down they loved each other.

The Knife of Never Letting Go isn't always an easy book to read, I went through a whole range of emotions from anger and disgust all the way through to love and heartbreak, but it is a book that will keep you hooked from the very beginning. My one main complaint is that I still don't understand why everyone from Prentisstown was so desperate to catch Todd and bring him back, we were given an explanation but even now it doesn't make much sense to me. I also found the continual reappearance of a particular character was just odd and completely unbelievable - I can't see how he would have survived so much. In spite of that I still really enjoyed the story and I'm just glad that I already own the rest of the trilogy because there is no way I'd want to wait a year for the next book after that cliffhanger ending! If like me you're one of the few people who is still new to this series then I'd definitely recommend it to fans of YA dystopian stories.