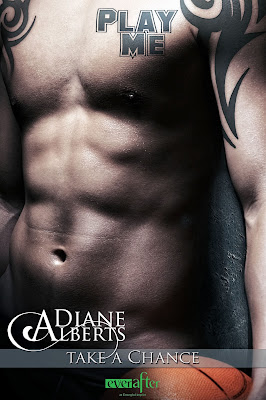 Even the best-laid plans can go awry.

Single-mom Kiersten Worth knows a bottle of champagne and night of hot, no-strings-attached sex is the perfect solution to her jilted bride blues…and Garrett Kelly, long-time friend and her teenaged son’s sexy basketball coach, is just the stud for the job.

Garrett wants more from the elusive temptress than a casual affair, but he never expects it to come in the form of an unexpected pregnancy. When he proposes an unorthodox solution—move in and raise their baby together—Kiersten has to decide whether to let down her guard and open her heart to the man who secretly loved her for years, or risk losing his tender embrace for good.

Take A Chance Series:
Try Me
Love Me
Play Me
Take Me

Review:
I'm a huge fan of Diane Alberts' Take a Chance series so I couldn't wait to read the latest instalment Play Me. Although there is a slight cross over of characters throughout this series each of the books work well as a stand alone story and is focused on a different couple. I've enjoyed each instalment though so it's definitely a series I'd recommend to contemporary romance fans.

Kiersten is Brianna's sister so we'd already met her in the previous story (Love Me) but we didn't know a great deal about her apart from the fact that she is a single mum who has raised her 13 year old nephew Chris ever since his parents were killed when he was a baby. Since the day her ex fiancé broke both their hearts by leaving her for another woman Kiersten has been determined to protect them both by staying away from men. But as the date of what should have been her wedding day approaches she decides she could use a little harmless distraction and she can't think of anyone more perfect than her close friend Garrett. Garrett has a reputation as a ladies man so Kiersten has no reason to believe that he will be interested in anything more than a one night stand but what she doesn't realise is that he has been in love with her since they were at high school. He is best friends with her brother Mike so never tried to make a move but he can't turn her away when she comes to him. Garrett is devastated when Kiersten walks away after their amazing night together but when he finds out the consequences of their night of passion he sets out to prove to her that they could have an amazing future together.

I have to admit that Kiersten wasn't my favourite heroine of this series, in fact there were quite a few times when I wanted to strangle her! I think the majority of us have had our hearts broken at some point in our lives so I could understand how hurt she was by her ex's betrayal but that didn't excuse the way she treated Garrett. He was so incredibly sweet and supportive and he literally put his life on hold to be there for both her and Chris in every possible way but she constantly snapped at him and accused at him of messing her around. Even when she found out how much she had hurt him with her behaviour she didn't really apologise to him but she still expected him to be at her beck and call. I have to admire her for the way she took on Chris and raised him as her own but I was so annoyed with her that I found it hard to see why Garrett was so determined to win her heart.

The thing that kept me reading in spite of Kiersten's behaviour was definitely Garrett. I think you can already guess I had a bit of a crush on him and he was definitely a fabulous, swoon worthy character. I loved the way he took time to bond with Chris and reassure him that he would always be around for him and his mother. I also admired his determination to win Kiersten around (even if she didn't deserve him!) and the way he was always there for her no matter how hard she made it for him. I have to mention how awesome Kiersten's brother Mike was in this story (& I was very happy to discover that he will be the hero of the next story!), there was a particular point where he gave her the reality check that she desperately needed and I found it much easier to connect with her character from then on. It took her a long time to realise what was staring her in the face but once she came to terms with the fact that Garrett was as trustworthy as they get she did make an effort to let him in.

As much as Kiersten wasn't my favourite heroine she did grow on me by the end of the story and the sexy hunk that is Garrett more than made up for her. Diane Alberts is one of my favourites when it comes to hot contemporary romances and Play Me didn't disappoint in that regard. I just hope she doesn't keep us waiting too long for Mike's story!