Review: The Name on Your Wrist - Helen Hiorns 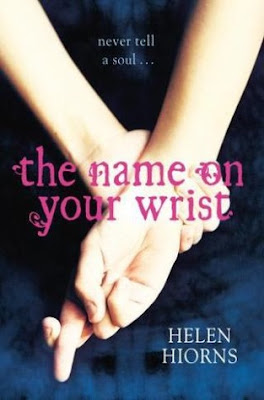 It's the first thing they teach you when you start school. But they don't need to; your parents tell you when you're first learning how to say your name. It's drummed into you whilst you're taking your first stumbling steps. It's your lullaby. From the moment it first appears, you don't tell anyone the name on your wrist.

In Corin's world, your carpinomen - the name of your soul mate, marked indelibly on your wrist from the age of two or three - is everything. It's your most preciously guarded secret; a piece of knowledge that can give another person ultimate power over you. People spend years, even decades, searching for the one they're supposed to be with.

But what if you never find that person? Or you do, but you just don't love them? What if you fall for someone else - someone other than the name on your wrist?

And what if - like Corin - the last thing in the world you want is to be found?

The gripping debut novel from the winner of the inaugural Sony Young Movellist Award.

Review:
Can you imagine a world where everyone is born with a soul mate? A world where when you reach about three years old a name will appear on your wrist, your carpinomen, a name that you must keep hidden from everyone - even your family - the name of the person who you are meant to spend the rest of your life with? It isn't forbidden for you to date or marry someone who isn't your soul mate but it is frowned upon and you will quickly earn yourself a reputation if you are seen dating people with different names. Everyone is supposed to make finding their soul mate their main focus in life and you really, really aren't supposed to fall in love with someone whose name isn't on your wrist. Corin lives in such a world but she has seen exactly what love did to her mother and her sister and she is determined not to go down that same path. She wants something different for herself and she has no intention of looking for her soul mate but what if love finds her when she least expects it?

The Name on Your Wrist is Helen Hiorns' debut novel and was the winner of the first Sony Young Movellist Award. The story has a very unique concept so I can see why it stood out amongst other entries and I found it an enjoyable read. I had high expectations for this story when I picked it up, the idea of people having their soul mate's names written on their wrists was a really interesting one and I couldn't wait to find out how this phenomenon came about. Although I enjoyed the story I did find myself a little disappointed that we didn't get more background information about the world and how it came about. It takes a long time before you get any kind of explanation and when you do it feels a bit rushed and was glossed over too quickly. I just wanted more information about it all.

I liked Corin and felt bad for everything she has gone through since her father's death, her mother pushed her grief to one side, moved the family to a new town and tries to pretend nothing has changed while her sister has been in and out of hospital since suffering from a breakdown. Corin is left on her own to deal with everything and she doesn't really have anyone to turn to for help. As much as I felt sorry for Corin I found her difficult to connect with, she was supposed to be 19 but most of the time she acted as though she was much younger, I'd have found her character more believable if she was supposed to be 16. I understand that she was quite sheltered because of the world she lived in but it was one of those things that bugged me. I just found a lot of her actions were quite selfish and I hated the way she deliberately set out to hurt people whether she felt they deserved it or not. She could also be quite judgemental even though she complained about other people judging her family when they didn't have the full facts.

I did really like Colton though and I liked the person Corin became as she became friends with him. She didn't really have anyone she was close to before he came into her life and the way he got her to open up to him showed her in a completely different light. I felt more sympathetic towards her because of the discoveries Colton helped us make and I though they were really cute together. I have to say I wasn't a fan of the ending though, Helen Hiorns certainly managed to throw a few twists in there, some I saw coming and some that I didn't, but everything seemed to wrap up just a bit too tidily and it was all a little convenient. This author is definitely one to watch out for though, the sheer amount of imagination that has gone into building her world and the fact that she manages to introduce readers to it quite smoothly and without huge info dumps shows skill and I think she'll just get better at plotting and creating believable characters with each book she writes. Overall I'd say that The Name on Your Wrist is a unique debut and certainly worth checking out if you want to see a different take on the soul mates plot line.