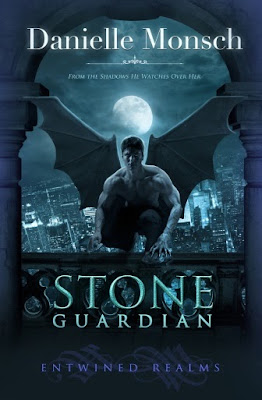 Gryphons flying past skyscrapers? Wizards battling it out in coffeehouses? Women riding motorcycles with large swords strapped to their backs? All normal sights since the Great Collision happened twenty-six years ago.

Well, not normal for everyone. Larissa Miller may have been born after the Great Collision, but as a history teacher who lives in the human-only city, she has never come into contact with any other race or species, nor has she wanted to. Her life is as ordinary as it gets - that is, until one day she walks out of her apartment and is attacked by a mob of Zombies, only to be saved by a Gargoyle.

Gargoyles trust no one outside their Clan, but due to a cryptic prophecy, Terak, Leader of the Gargoyles, has been watching over the human woman for months. While he can find no reason why the woman has been singled out, something about her stirs every protective instinct within him. When the attack confirms that the threats against her exist and are real, he convinces Larissa that though their races have never been allies, the best chance of discovering why she has been brought into his world is by working together.

In the course of their investigation Terak becomes entranced by his little human. But when he discovers why Necromancers want her and the great reward that awaits him if he betrays her, he must choose between the welfare of his Clan and not only Larissa’s life, but the fate of this New Realm as well.

Review:
I wanted to read Stone Guardian purely because it was a paranormal romance with a gargoyle hero, come on how could I possibly resist that? I was expecting a story that would be heavy on the romance and hopefully have a little world building to go along with it but I wasn't expecting the fantastic world full of so many wonderful supernatural creatures that Danielle Monsch has created. The book starts with a bang as two world collide, the human dimension suddenly finds itself sharing space with a world full of gargoyles, elves, mages, werewolves, vampires, necromancers, orcs, goblins, zombies, direwolves and much, much more and I'm sure you can take a good guess at the kind of chaos that would cause!

26 years on from the Great Collision things have calmed down to a certain degree now that everyone has learned to live together. Well, a lot of the humans have managed to ward their cities so that none of the supernatural creatures can come anywhere near them and they're now quite happily living their lives in ignorance, but, a lot of the other species have carved out their own territories and come to agreements with each other. Larissa is one of those humans who is bumbling along in her human only city quite happily ignoring the world outside. Until the day she is attacked by zombies that is. First of all how the hell did the zombies get through the wards and what could they possibly want to come after her for? Secondly who is the mysterious gargoyle who has rescued her and now he's whisked her away to his lair will she ever see her family again?

I have to admit I had a bit of a love-hate relationship going on with Larissa. It irritated me no end that she was so completely ignorant about all of the supernatural creatures now sharing her world. I know her father and big brothers were overprotective of her but she was a grown woman, intelligent enough to be a teacher and she hadn't bothered to do any research? That just struck me as a bit odd and made me want to shake some curiosity into her! Having said that she really does start to come into her own as the story continues, once she gets over the shock of what is happening she uses her brain and she knows when to accept the help she needs. She isn't a kick ass heroine in any sense of the word but there are times she fights next to her man rather than just sits around waiting for him to rescue her. She also learns to stand up to her father and brothers and she stops letting them push her around and walk all over her. She definitely has her stupid moments but overall I ended up learning to like her and I do think that her flaws made her more realistic.

I really liked Terak from the get go though, he was a fab alpha character who is protective of his people and of Larissa since he has become her protector. I loved the fact that he wasn't a super experienced womaniser and that he treated Larissa with respect and let her make her own choices. He wanted to protect her but he accepted that it needed to be on her terms and that it wouldn't be right to force her to do things his way even though he was physically capable of doing it if he really wanted to. If Terak hadn't been enough to keep me reading (and he definitely was!) then the side characters would have. Larissa may not have been a kick ass female lead but that doesn't mean there weren't any strong female characters. I absolutely loved Fallon and can't wait to get my hands on her story, watching her slay enemies with her sword was epic and I also enjoyed seeing her work alongside Laire and Aislynn. Those women sure know how to kick butt and they're not afraid to get a little bloody as they do it.

I think it would be wrong not to mention that there were some editing errors in this book. The spelling mistakes, missed words and grammar problems were enough to pull me out of the story on occasion but considering that is a major hot button of mine and that I never once considered giving up reading the book that should tell you just how good the story was. Since the version I read was an ARC I'm hoping a lot of these issues may have been resolved in the final version but even if they haven't I'd still highly recommend reading this book. As much as Stone Guardian is labelled paranormal romance (and each book in the series will focus on a different couple) I would actually be tempted to label it urban fantasy. There is so much action and such fantastic world building that it really didn't feel like the romance was the main focus of the story. That isn't a complaint by the way, it had the perfect combination of romance and action to make it an edge of your seat read and have me hooked from the very beginning. This really is a fantastic start to a new series and it's one I'm incredibly excited about continuing!