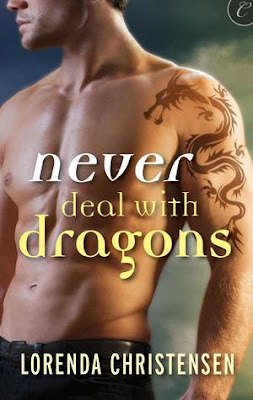 Consoling a sobbing dragon and serving pig buffets are just part of the job for Myrna Banks. Working for a mediation firm, it’s her job to get humans compensated for damages caused by the dragons who now rule. But her “typical” day is interrupted by Trian Chobardan, an old flame who sneaked out of her bed two years ago, taking her heart and a handful of classified documents with him.

Myrna would love to show Trian the door, but he’s been sent by North America’s reigning dragon lord for help negotiating a truce with a powerful rival to avert war. Myrna agrees to help, even though she’ll be stuck with Trian as a partner.

As the two work together, Myrna finds Trian to be surprisingly supportive—and still irresistibly attractive. Though her brain tells her not to forget his betrayal, her body feels differently. When they learn the enemy dragon lord is planning something no one could have imagined, Myrna has to learn who she can trust before she loses not only her heart, but her life.

Review:
In this futuristic world, set sometime after WWIII dragons are definitely at the top of the food chain. They rule over humans like lords of the manor and the humans aren't powerful enough to resist them. Myrna works for DRACIM (Dragon Relations, Arbitration, and Cooperative Interspecies Mediation) and it is her job to help keep the peace between humans and the dragons. This can often be quite a messy business and the kind of things she has to deal with make for hilarious reading. The first line in the book is "It's amazing how often my day starts with a three-legged dragon and an enraged dairy farmer." and I knew from that point that I was in for a fun read.

I actually picked this story up expecting a fairly standard paranormal romance, I love dragons and along with a couple of friends I was looking for something hot and steamy so this looked like it would fit the bill perfectly. As it goes I think the cover is quite misleading because in a lot of ways this one reads more like an urban fantasy, I'm not complaining because I happen to love UF as well as PNR but I do prefer to know what I'm getting when I pick up a book. I loved the unexpected humour right from the beginning, watching Myrna try to hammer out an agreement between a very pregnant and hormonal dragon and the farmer whose livestock has been eaten was very comical and I really liked the way Myrna was so spunky. In fact I quickly warmed to Myrna and had high hopes that she was going to be a fabulous heroine. In a lot of ways she was but when it came down to her ex-boyfriend Trian she turned into a doormat and just let him walk all over her and she lost all my respect for that.

Myrna and Trian had been dating a year and she was dreaming of wedding bells when he vanished overnight taking some of her very sensitive work documents with him and leaving only a very brief note of apology. Since then Myrna's work life has been hell, because she lost the documents she was demoted and she now has to work for the most hopeless boss on the planet who treats her like dirt. There aren't many jobs for dragon speakers though so she doesn't really have any other choice but to accept her current situation. When she is given the task of mediating a dispute between two dragon lords she suddenly finds herself face to face with Trian again for the first time since he left her. Now, the two of them obviously had chemistry and I actually thought Trian was quite nice at first. I was sure he had to have a very, very good reason for abandoning her like he did and I expected a huge apology from him when he explained what had happened. Unfortunately that didn't happen, not only was his reason incredibly pathetic but he hardly gave any form of apology before Myrna had rolled over and forgiven him. I get that Trian is hot but he walked out on you and his actions have made your life a misery for the last year - why would any self respecting woman let a guy get away with that unless he had fallen at their feet begging for forgiveness?

Luckily for me the romance didn't feel like the main focus of this story and I did really enjoy the world building. I loved the fact that there was a reason that dragons had only arrived on the scene fairly recently and I was pleased that they had basically taken over the world because they were so much more powerful. It's not often that supernatural creatures are given the upper hand in stories like this, they are usually living in secret and hiding from the human population so this made a nice change. There were some interesting developments in the ongoing plot that definitely make me curious to see how things will play out. There was a certain amount of predictability to it though and a lot of things were so obvious to me as a reader that I was practically shouting at my kindle hoping one of the main characters would hurry up and figure it out.

Overall, I'd say that while I liked Never Deal with Dragons it didn't quite manage to live up to my expectations. I could have really enjoyed the romance if only Trian hadn't been such an unapologetic idiot and I would have loved the plot if the major twists had been a little less obvious. Considering that this is a debut novel I am prepared to give Lorenda Christensen another chance though because I think this has the potential to be a really fun series (and I do love books about dragons!).