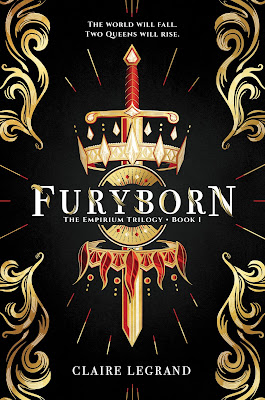 The stunningly original, must-read fantasy of 2018 follows two fiercely independent young women, centuries apart, who hold the power to save their world...or doom it.

When assassins ambush her best friend, Rielle Dardenne risks everything to save him, exposing herself as one of a pair of prophesied queens: a queen of light, and a queen of blood. To prove she is the Sun Queen, Rielle must endure seven elemental magic trials. If she fails, she will be executed…unless the trials kill her first.

One thousand years later, the legend of Queen Rielle is a fairy tale to Eliana Ferracora. A bounty hunter for the Undying Empire, Eliana believes herself untouchable—until her mother vanishes. To find her, Eliana joins a rebel captain and discovers that the evil at the empire’s heart is more terrible than she ever imagined.

As Rielle and Eliana fight in a cosmic war that spans millennia, their stories intersect, and the shocking connections between them ultimately determine the fate of their world—and of each other.

Review:
Furyborn is one of those debuts that has had a HUGE amount of publisher push behind it so it ended up being hyped to the max. I quite often have problems with books like this because my expectations are sky high and therefore almost impossible to reach. I hate to say it thats definitely what happened here, the story was good but it just never reached the heights I was looking for so I came away disappointed.

The story is told from two points of view with the chapters alternating between the characters. First you have Rielle, a young girl who has spent her life keeping her powers secret but who risks everything to save the life of the boy she loves. She is immediately the easiest of the characters to relate to and I was really hoping to see her get the happily ever after she deserves but the biggest problem is that her story is set 1000 years in the past and you know from the prologue how her journey is going to end. Yes we have questions about how she ended up in that situation but there is absolutely no sense of mystery about how things will turn out for her. I think giving so much away so early on pretty much ruined her story for me because I was always waiting for the shoe to drop.

The other main character is Eliana and unfortunately she was much harder to like. I could understand her motivations in trying to keep her family and friends safe but the way she's happy to walk all over anyone who stands in her way makes it hard to respect her. She does grow and change throughout the story but I still feel more invested in the people around her than I do in her. One thing I do enjoy is the strong friendships that both of the main characters have, there are some really great side characters here that I'd definitely like to see more of.

Furyborn is an action packed story, there is always something major happening in each different plot thread and you're often left on a cliffhanger for one girl's story before diving back into the other. This works really well to a certain extent but after a while it starts to feel like this is all action and no character development. There were times when I felt the story would have benefitted from slowing down a little to let us have time to get to know the characters better and then perhaps I could have felt more connected to them.

Overall this wasn't a bad book, it was fun to read and I flew through it fairly quickly for such a long book, but at the same time it wasn't perfect. It did hold my attention enough that I want to read the sequel but I'm really hoping to see some big changes in the characters as they start to understand exactly what is happening around them.