New York Times best-selling paranormal romance author Felicity Heaton is here today for the book tour of her new shifter romance release, Captured by her Cougar, the second book in her brand new Cougar Creek Mates Series. Set in her popular Eternal Mates world, Cougar Creek Mates takes you into the deep Canadian wilderness to a secret place that’s home to a cougar shifter pride led by four sexy brothers, each guaranteed to steal your heart and set it racing! With all four books in the series releasing just weeks apart, this is going to be one hot summer.

Check out the book, download it with your Kindle Unlimited subscription if you have one, and be sure to enter the awesome grand giveaway happening at her website! 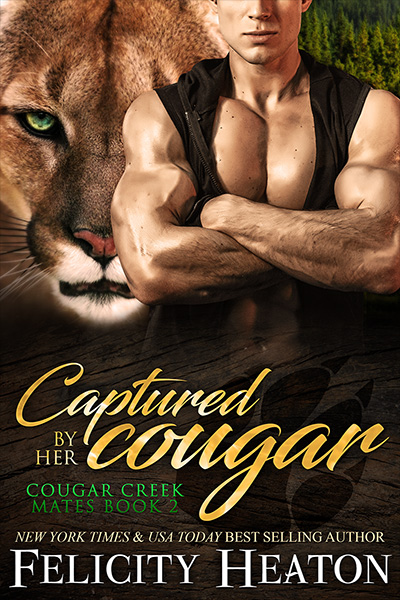 In the wake of an Archangel attack on Cougar Creek, Storm is seething with a need for revenge against the hunter organisation and the key to it might be the petite blonde mortal he’s locked in his cabin, one he’s determined to make sing for him. Only the beauty has a fiery temperament to match his own, and the more time he spends with her, the more she stokes a fire inside him. One that fills him with a startling and undeniable need to make her sing in another way—in his arms.

Gabriella isn’t going to take her captivity lying down. She’s going to give the pig-headed brute holding her against her will hell until he finally believes she’s innocent. He might be a cougar shifter, but she isn’t afraid of him. Or at least she isn’t afraid of what he is. The way he affects her, the flames that lick through her whenever they’re close, terrifies her though, because the longer she’s around the towering sexy-as-sin shifter, the hotter that fire blazes, and it’s only a matter of time before it burns away all her restraint.

With the mating heat and the attack bringing cougars back to the creek, Gabriella is a complication Storm doesn’t need, but she’s one that he wants… because she might just be his one true mate.

Read it with your Kindle Unlimited Subscription or buy now from…

Enter the grand tour-wide giveaway to win one of a $75, $50 or $25 Amazon Gift Card at the Claimed by her Cougar book page. This giveaway is international and open to everyone, and ends at midnight on August 12th. Enter now: http://www.felicityheaton.co.uk/captured-by-her-cougar-shifter-romance-book.php

Storm slid his gaze back towards the door.

She groaned and moved again, and this time, it sounded more like a whimper. He focused. Her heartrate was off the scale too. Having a nightmare?

He didn’t give a damn if she was.

Storm scrubbed a hand over his mouth. Fuck, it had been a mistake to set up his cabin as her cage. Sure, it had been the right thing, because it would keep her safe from the other males coming to the area and it was easier for him to keep an eye on her in his own home.

But the whole place smelled of her already.

Her scent was embedded in everything, felt as if it was seared right into his soul.

Sunshine, sand and surf, with a hint of something tropical.

He snagged the red comforter from the couch, brought it to his nose and inhaled, and muttered a ripe curse as it smelled of her.

And damn, she smelled good.

Had his instincts as a male firing on all cylinders.

He growled and hurled it away from him as he stalked to the front door of the cabin, intent on leaving.

He froze there, his senses immediately locking on her.

What had happened to Rath was her fault.

That refused to stick and he wanted to growl again, a need to blame her so he could direct some of the anger burning inside him at her twisting him into knots inside. He didn’t feel it though, not when it came to her.

He thought about Alexander, and sure enough, the blame stuck to him like super glue, had his anger flaring hot in his veins all over again.

He tried blaming her for what had happened to his parents, and to him, all those decades ago. It refused to stick too.

“Fuck,” Storm muttered and strode to the small white refrigerator beneath the kitchen counter, one that was rapidly warming now the power was out.

He yanked it open, grabbed a beer and slammed it shut again.

He cracked the brown bottle open, chugged the contents so fast he almost choked on them as he glared at the darkening world outside through the window, and didn’t flinch as he tossed the empty in the sink and it smashed.

Her fear shot through him.

Storm looked at the broken glass in the metal sink, and then over his left shoulder at the bedroom door.
He huffed as he strode to the main door of the cabin, tugged it open and slammed it behind him. He stepped off the raised covered deck that surrounded three sides of his single-storey cabin, and stormed along the worn path towards the clearing to his right. His fingers curled into fists and then flexed, his anger getting the better of him as he took long strides towards the river, the fading warmth of day washing over his bare chest.

He breathed hard, each one laboured as the need to burn off some energy returned, had him wound tight and his cougar side agitated, almost to the point of frenzied.

Two males came out of the thick woods to his right, stepping into the clearing, and he bared fangs at them and growled, hungry for a fight.

The younger males gave him a wide berth though, so all he could do was pace the stony bank of the river as the sun began to set.

He wasn’t sure how long he strode back and forth across the grass, his eyes on it as he fought to quell the urge to shift and start a fight.

When he felt eyes on him, it was darker, but his vision adjusted the second he lifted his head and fixed his gaze on the male approaching him.

“What are you doing pacing the riverbank?” Rath’s deep voice rolled over him, as smooth and calm as the water that raced over the rocks behind Storm.

He flashed fangs at Rath. “Pacing. What the fuck does it look like I’m doing? You have a problem with me pacing?”

“I have a problem when it leads to you being aggressive towards others.”

“Aggressive?” Storm snorted and took a hard step towards his brother, getting in his face. “You haven’t seen me aggressive.”

“I have.” Rath’s calm tone grated, had Storm wanting to grab him and do something. Rattle him. Shake him until he bit. “I take it things aren’t going well with Gabriella?”

Storm bared his teeth again at the mention of her name. “Little Bird will sing.”

Rath arched a dark eyebrow at that, but didn’t pick him up on the nickname he had given her. “Maybe you need to go back to your cabin and cool off.”

“Maybe you need to get the fuck out of my face?” Storm took another hard step forwards, bringing himself chest to chest with his brother.

Rath just sighed. “I’m not going to fight you, so quit trying to make it happen.”

Storm felt like a dick as Rath took a casual step backwards, placing some distance between them. Threatening his brother when he was injured? What the fuck was wrong with him?

He stared at Rath’s right shoulder, seeing beyond the dark fleece he wore to the wound beneath.

An injury her brother had given him.

He growled and looked towards his cabin, seething with a need to return to her and do something to make her talk.

“She hasn’t said anything at all?” Rath’s measured tone, so calm and even, soothed him and he clawed back some control over his mood, enough that he could progress from merely growling and snapping at his brother to having a conversation.

“She asked about your condition, and she wants to see Ivy.” Storm didn’t take his eyes off his cabin.
“Ivy mentioned that Gabriella was the one who secured her initial funding from her brother, and they get along.”

So Little Bird hadn’t been lying about that then.

Rath continued, “Maybe it’s a good idea that Ivy speaks with her. I’ll go with her.”

Storm growled at that, a low vicious one that echoed around the forest and had a few birds flying their roosts.

Because no damned way he was letting Rath take over things with his Little Bird.

He pushed past his brother, his words a dark snarl in the fading light, filled with purpose and determination.

Read it with your Kindle Unlimited Subscription or buy now from…


If you want to know more about Felicity, or want to get in touch, you can find her at the following places: