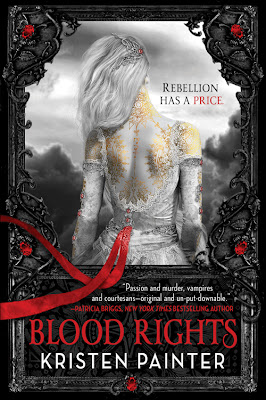 The lacy gold mapped her entire body. A finely-wrought filigree of stars, vines, flowers, butterflies, ancient symbols and words ran from her feet, up her legs, over her narrow waist, spanned her chest and finished down her arms to the tips of her fingers.

Born into a life of secrets and service, Chrysabelle’s body bears the telltale marks of a comarré—a special race of humans bred to feed vampire nobility. When her patron is murdered, she becomes the prime suspect, which sends her running into the mortal world…and into the arms of Malkolm, an outcast vampire cursed to kill every being from whom he drinks.

Now Chrysabelle and Malkolm must work together to stop a plot to merge the mortal and supernatural worlds. If they fail, a chaos unlike anything anyone has ever seen will threaten to reign.

Review:
Chrysabelle is a comarre and from birth has been trained to be the perfect blood slave for a vampire.  When her patron is murdered and she is the prime suspect she has to run from everything she has ever known and take refuge in the human world.  She is going to need help if she wants to remain hidden from the vampire nobility but when she meets outcast Mal she gets more than she bargained for.  Mal doesn't want or need any new complications in his life.  He is already dealing with a double curse - the first that causes him to kill anyone he ever drinks from and the second that has caused all of his victim's names to appear on his skin and their voices to become a constant drone inside his head.  He's already on the verge of insanity and the scent of Chrysabelle's blood may just be enough to push him over the edge.

I was really excited about Blood Rights but I have to admit that I found the first half of the book a little confusing.  Kristen Painter has built a complicated and detailed world and it took me some time to get my bearings and start to understand how everything fits together.  I was fascinated by the idea of the comarre though, they are like geisha's to their vampire patrons - pure blooded, beautiful and trained to be graceful companions.  They also have their secrets from their patrons though and I have a feeling we've only just begun to uncover them.  I still have some questions about how various parts of the comarre / patron relationship works and I'm hoping these will be answered in future books in the series.

Chrysabelle can be incredibly naive and innocent about the human world, although she is over 100 years old she has had very little interaction with anyone outside vampire nobility and her comarre community.  I was a bit worried that she would be one of those heroines who has to sit around and wait for the hero to rescue her but she quickly proves that she is capable of protecting herself, in fact what she needs most from Mal is help remaining hidden from the vampire nobility who are chasing her.  Mal is a tortured hero and I couldn't help but feel for him, the effects of his curses would be enough to drive anyone mad and Mal is definitely on the edge.  There is great chemistry between the two of them and although at the moment they both love to hate each other I'm looking forward to seeing how things play out in future books.

As I got to grips with the mythology I was able to really appreciate the complexity of the world building and I enjoyed the second half of the book much more. There is more action, some great sexual tension between Chrysabelle and Mal and we are given a lot of hints about the wider story line that had me excited about reading the next 2 books in the trilogy.  If you're looking for a new take on vampires then it would definitely be worth picking up a copy of Blood Rights.  The really good news is that the last 2 books are both being released this year so there will be no long wait between installments - I've already preordered my copies!

Source: I was given a copy of this book at AADPhilly in exchange for an honest review & also downloaded a copy from Netgalley so I could start reading it while I was waiting for the box of books I shipped home to be delivered.

Other Reviews:
Nocturnal Book Reviews
If you have reviewed this book on your blog please leave a link to your review in the comments & I'll add the link here.