Review: The Other Countess - Eve Edwards 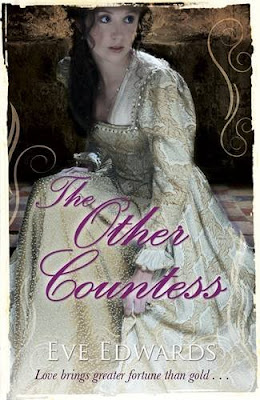 Ellie - Lady Eleanor Rodriguez of San Jamie - is in possession of a worthless title and a feisty spirit that captivates the elite of the Queen's court, and none more so than the handsome new Earl of Dorset . . .

William Lacey has inherited his father's title and his financial ruin.  Now the earl must seek a wealthy heiress and restore his family's fortune.

Will's head has been turned by the gorgeous Ellie, yet their union can never be.  Will is destined to marry a lady worthy of his status, so the only question is - which one . . . ?


The Lacey Chronicles:
The Other Countess
The Queen's Lady
The Rogue's Princess

Review:
I have really been enjoying historical fiction recently but most of the stories I've read have been set in the Victorian era so it made a nice change to come across something set in Tudor times at the court of Queen Elizabeth I.  Eve Edwards has done a fantastic job of capturing the era, life at court was fascinating and I loved the jousting contest what I enjoyed most though was the characters.

Ellie (or Lady Eleanor Rodriguez of San Jamie if you go by the title she inherited from her mother) is the daughter of an alchemist and more like her father's carer than his daughter.  He is obsessed with finding the formula to create gold and doesn't really think about how his pursuit effects Ellie.  They are constantly moving as he tries to find someone to sponsor his work and often end up having to sleep in barns.  Her father has destroyed their families reputation and although Ellie is beautiful she has now dowry to offer potential husbands.  She is intelligent and can speak several languages but in Tudor England her skills are not seen as an asset by most men.

Will (the Earl of Dorset) inherited his title when he was just 14 after the death of his father.  He blames Ellie's father for the loss of their family fortune and has had to work hard to support his family in any way he can.  He is now left with no option but to try and find a wife with a dowry big enough to support the family estate.  When he first meets Ellie he doesn't recognise her as his nemisis' daughter and there is an instant attraction between them.  Ellie knows exactly who Will is and is equally sure that they can never be together, not when he learns who her father is and that she doesn't have a dowry to offer him.

Ellie is a great character, she is smart and also a realist.  She may dream of being with Will but refuses to be the one who stops his chances of regaining his family fortune.  I felt for her having to put up with her father and his quest for gold and it was easy to want her to have a happy ending.  Will is the character who goes through the most growth throughout the book though, when we first meet him he is just 14 and has been thrust into the position of trying to provide for his family after his father has wittered away their money helping Ellie's father.  It is no surprise that he hates the alchemist and although he behaves terribly to Ellie and her father you can easily see why he acts the way he does.  As he gets older it becomes much easier to like him as he starts to realise that the way he behaved before was wrong.

I loved the relationship between Will and his brothers so was very pleased to realise that this is the first book in a series and that we will get to see more of them all together.  I didn't expect to like Ellie's romantic rival Lady Jane but I actually found myself feeling quite sorry for her and the way men seemed to only be interested in her for her dowry.  It will be interesting to see how things play out for her in the next book.  If you're a fan of YA historical romances then I'm sure you will enjoy The Other Countess as much as I did and would highly recommend giving the series a try.

Source: Borrowed from the lovely Kirsty at The Overflowing Library

Other reviews of this book:
The Overflowing Library
If you have reviewed this book on your blog please leave a link to your review in the comments & I'll add the link here.