Review: A Heart of Blood and Ashes - Milla Vane 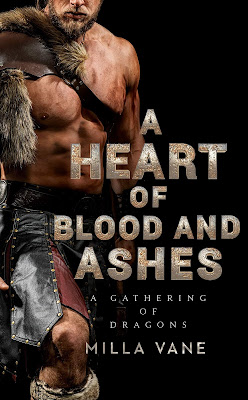 A generation past, the western realms were embroiled in endless war. Then the Destroyer came. From the blood and ashes he left behind, a tenuous alliance rose between the barbarian riders of Parsathe and the walled kingdoms of the south. That alliance is all that stands against the return of an ancient evil--until the barbarian king and queen are slain in an act of bloody betrayal.

Though forbidden by the alliance council to kill the corrupt king responsible for his parents' murders, Maddek vows to avenge them, even if it costs him the Parsathean crown. But when he learns it was the king's daughter who lured his parents to their deaths, the barbarian warrior is determined to make her pay.

Yet the woman Maddek captures is not what he expected. Though the last in a line of legendary warrior-queens, Yvenne is small and weak, and the sharpest weapons she wields are her mind and her tongue. Even more surprising is the marriage she proposes to unite them in their goals and to claim their thrones--because her desire for vengeance against her father burns even hotter than his own...

Review:
There is so much I want to say about A Heart of Blood and Ashes that I really don't know where to start. I've tried so many times to sit down and write this review but my concentration is shot to pieces at the moment and I'm finding both reading and blogging really hard. What I can say is that this is without a doubt the best new series I've discovered in a long time. I've already read this book 3 times since January and I love it more every time I pick it back up. I grew up reading fantasy and developed a taste for romance in my teens but books that combine the two are pure joy to me, especially when they're written as well as this one.
I honestly can't think of a single thing that I disliked about this book, Milla Vane (aka Meljean Brook) has created a rich and detailed fantasy world full of barbarian warriors, vengeful gods and goddesses and an ongoing plot to destroy the realms. This is a dark world so I'll warn you now that the characters we love won't have an easy journey but I never felt that the author glorifies the violence or includes things unnecessarily.
I want to talk a little about our main characters. First we have Maddek, barbarian warrior and son of the king and queen of the Parsathians. Maddek has spent years fighting on the frontlines but when he learns of his parent's deaths he doesn't believe the story that the alliance council tells him so vows to find out the truth and to seek vengeance against whoever is responsible for their murders. Something happened when they travelled to Syssia to seek a bride for him and he blames King Zhalen. He initially abducts the king's daughter Yvenne planning on using her to seek his revenge but instead of an unwilling captive he finds himself an ally who hates her father even more than he does.
Yvenne has many reasons to hate her father, the fact that she's been kept imprisoned in a tower for her entire life is just one of them. Zhalen is to blame for so much of Yvenne's suffering but he's also the one keeping her from claiming her rightful place as the queen of Syssia. Yvenne has watched for years as her people have suffered under his rule and she wants Maddek to help her protect them all. I absolutely love Yvenne, she isn't the strongest character physically but she has a mental toughness that few others could match. She's smart, cunning and willing to play dirty to get what she needs and I have a huge amount of respect for her.
Maddek makes a lot of mistakes with Yvenne, there were multiple times when I wanted to shake some sense into him but even when I was so frustrated I could understand where he was coming from and I found it easy to root for them as a couple. The chemistry between them was instantly off the charts and they really had some of the sexiest foreplay scenes I've ever read long before they ever had full sex but it was the slow build of their romance that really pulled me in. Maddek was stubborn and refused to admit what we could all see happening but when he made mistakes he was man enough to admit them, apologise and try to make amends.
I feel like I could rave about this book for hours but I just want everyone to go out and read it for themselves. I knew back in January that this was going to be my favourite book of 2020 and two rereads later that hasn't changed. If you like fantasy romance this is hands down my top recommendation for you, so stop wasting your time reading reviews and just buy a copy already!
Source: Received via Netgalley in exchange for an honest review