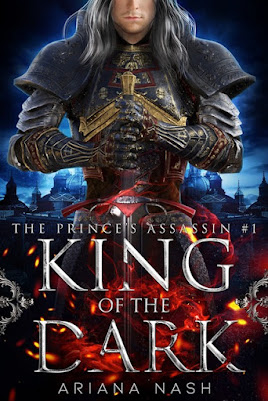 From the author who brought you the award-winning Silk & Steel series comes a new dark MM high fantasy.
"Your love is worthless, it's your hate I need." ~Prince Vasili Caville
When King Talos Caville surrendered the war to the elves, soldier Nikolas Yazdan vowed never to serve the royals again. He said the same to the prince who tried to buy his loyalty, and learned the Cavilles don’t take no for an answer.
Whipped for his insolence, Nikolas is forced into slavery in a palace full of vicious, brutal royals. And Prince Vasili Caville is the worst of all. Malicious and cruel, the prince is more viper than man, and someone inside the palace wants him dead. Nikolas would kill the prince himself if not for one thing: Julian, the prince’s personal guard and Niko’s light in the dark. If Nikolas doesn’t submit to Prince Vasili and discover who is plotting against him, Julian will suffer.
But there’s more wrong in the palace than just the prince. The king is on his deathbed, the ferocious elves are creeping closer to the great city of Loreen, and madness stalks the hallways. There’s poison in the Caville court, and if Nikolas doesn’t discover the real reason Prince Vasili tried to buy him with a bag of coin, the palace, the city, and everything he loves, will be lost forever.
King of the Dark is the first book in the slow burn, enemies-to-lovers Prince’s Assassin series. A gay Game of Thrones with a hint of Witcher thrown in, there are triggers, including but not limited to: reference to past abuse, attempted rape, dubious consent, reference to incest, torture, drug use and PTSD. High heat sexual content. The Prince’s Assassin is for 18+ only.
The Prince's Assassin Series:
King of the Dark

Review:
King of the Dark is the first book in a new M/M dark fantasy trilogy from Ariana Nash and it brings all the twists and turns you'd expect from this author to the table. I always go into her stories trying to expect the unexpected but she never fails to sideswipe me with something I didn't see coming and that's something I absolutely love about her books.
Niko was a soldier who fought on the front lines against the elves who are trying to invade his kingdom. He lost friends and family to the war but he continued to fight because he believed knew the danger the elves possessed and was determined to keep his home as safe as possible. Everything changed for him when his king surrendered to the elves and he now sees all his losses as pointless. Niko is bitter and angry at the world in general but the royal family in particular so when he is approached by Prince Vasili he initially refuses to be caught up in another plot by a royal. The prince isn't used to taking no for an answer though so when commanding Niko to do his bidding doesn't work he thinks nothing of resorting to imprisonment and torture to get what he wants. As Niko grows closer to Vasili's personal guard Julian he realises that he's going to have to start to play Vasili's games if he wants to make sure they both survive the internal squabbles of the royal court.
I really don't want to say much more about the story here so I'm going to focus on how much I enjoyed getting to know the characters. The way things unfold mean you're constantly learning new things and hidden secrets about each of the main players and it was really interesting to have my initial feelings about them all turned upside-down with each new revelation. The royal court really is a nest of vipers and nearly everyone you meet would happily stab their own mothers in their back for the chance to get what they want so it's very hard to know who to trust or to truly understand what most of them are capable of. Whenever I thought I had someone figured out something would happen to completely change my opinion and I think we've only just started to scratch the surface of what is really going on in this world.
King of the Dark was a fantastic start to this series and I honestly can't wait for the next instalment to see what happens next for my favourite characters.