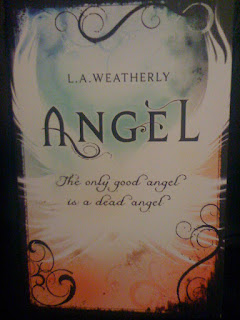 Willow knows she's different from other girls.  And not just because she loves tinkering around with cars.  Willow has a gift.  She can look into people's futures, knows their dreams, their hopes and their regrets, just by touching them.  She has no idea where she gets this power from...
But Alex does.  Gorgeous, mysterious Alex knows Willow's secret and is on a mission to stop her.  The dark forces within Willow make her dangerous - and irresistible.  In spite of himself, Alex finds he is falling in love with his sworn enemy.

Utterly intoxicating and deeply compelling, Angel is an epic tale of love, destiny and sacrifice.

Review:
Willow has always been different from other girls her age, preferring to spend time fixing an engine rather than going to parties and worrying about clothes and make up.  She has always had psychic abilities and gives readings to friends answering questions they have about their futures but when popular student Beth asks for a reading it will have a life changing effect on Willow.  Through Beth Willow discovers that Angels exist, they may be beautiful to look at but it is obvious to Willow that they are not what we have always believed them to be.  Looking into Beth's future she sees a life of pain and illness if she joins the Church of Angels and tries to warn her but will Beth accept her advice?  Alex has been sent on a mission to destroy Willow but when he first sees her he finds that not all is as it should be.  He decides to investigate further and discovers Willow's secret - something that even Willow is not aware of.  For Willow nothing will ever be the same and she will need Alex's help to survive.

I was a bit worried about reading Angel by L.A. Weatherly as I don't seem to have a great track record when it comes to young adult angel books - I was disappointed with Hush, Hush and although I liked Fallen I didn't think the sequel Torment quite managed to live up to it.  Now having read Angel I can honestly say I don't know what I was worried about - it was by far the best angel book I've read & I can't wait to get my hands on the next 2 books in the series!

Angel is written in a combination of first person (from Willow's point of view) and third person (from Alex's point of view).  I found this was a really interesting way to tell the story and although it threw me a little at first once I got used to it I really liked the change in tone.  It made it easier to keep track of who's view point we were following and I think it added something to the story.

I absolutely loved the twist on angel mythology which made it unlike any other book I've read.  I'm very curious to see how things develop with the Church of Angels over the series especially after the ending of this book.  I really liked Willow but it was Alex that completely captured me - move over everyone who came before, Alex is now my new inappropriate book crush!  I really liked the fact that Alex wasn't  the typical bad boy type character we have seen a lot of in YA books recently.  Yes he was mysterious (particularly at the beginning of the book) but we actually get to find out quite a lot about his past which made a nice change.  Neither Willow or Alex have led particularly easy childhoods albeit that their circumstances were entirely different.  Willow grew up as the main carer for her Mother who is suffering from a mental illness while Alex grew up in the dessert amongst a camp of assassins and you can really see the effect their upbringings had on them both in their personalities.

The action is fast paced throughout most of the book and the story will suck you in and take you on a thrill ride as you travel across the US with Alex & Willow.  The plot twists and turns taking you to unexpected places and I ended up staying awake until 6am just so I could finish reading it.  There is a section towards the end of the book where the pace slows down and concentrates on the budding romance between the main characters.  I loved that section of the story and thought L.A. Weatherly perfectly captured the magic of your first love - the awkwardness & embarrassment, the overwhelming strength of feelings and the amazement of that perfect first kiss that you've always dreamed of.  This part of the book reminded me of the emotion in Shiver so I'm sure fans of that series will love it but I can understand that if you're not too keen on character driven romances you might find that part of the story a little on the slow side.  Personally I loved the change of pace and was transported back in time to when I was a young teen with my first boyfriend.  Not to worry if that isn't your kind of thing though - the action soon builds back up again and leads to an explosive finale!

There were a couple of things toward the end of the book that haven't been explained fully but I'm sure that will be resolved later on in the series.  Although there is a cliffhanger at the end I think the book finished quite in a good place and although I'm keen to read the next installment I wasn't left screaming with frustration like you can be with some series.  I'm sure any fans of young adult paranormal romance will enjoy Angel - I can't recommend it highly enough.  It really was one of my favorite books of the year & definitely my favorite in the angel genre!


Source: Received from Usborne in exchange for an honest review.
Other reviews of this book:
Rhiana Reads
I Want To Read That
If you have reviewed this book on your blog please leave a link to your review in the comments & I'll add the link here.