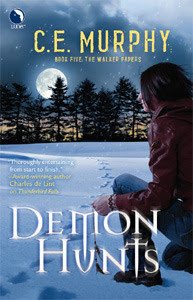 Seattle police detective Joanne Walker started the year out mostly dead, and she's ending it trying not to be consumed by evil. Literally.
She's proven she can handle the gods and the walking dead. But a cannibalistic serial killer? That's more than even she bargained for. What's worse, the brutal demon leaves no tracks. So, if Joanne is to stop its campaign of terror, she'll have to hunt it where it lives: the Lower World, a shamanistic plane of magic and spirits. Trouble is, Joanne's skills are no match for the dangers she's about to face-and her on-the-job training could prove fatal to the people she's sworn to protect....

Review:
Joanne Walker is a police officer but she is also a shaman and along with her partner Billy Holiday she investigates crimes that involve the supernatural.  Joanne isn't an expert Shaman though, she is new to her powers and is definitely having to learn on the job.  This time they are up against a serial killer who is eating part of their victims but leaving absolutely no evidence behind to give the police a clue to their identity.  Can Joanne track down the killer using her magical abilities before he claims any more victims?

Before I start this review I have a confession to make - when I started Demon Hunts I didn't realise it was book 5 in a series (which is very unlike me as I'm quite obsessive about reading series in order!) so I did find myself getting a little confused in places as I wasn't sure of the back story.  I still really enjoyed the book and am now planning on reading the other books but I have a feeling that I've probably picked up on some major spoilers for previous stories so I would strongly recommend reading this series in order.  Although this review won't include spoilers for Demon Hunts I can't guarantee it won't include spoilers for previous stories so you might want to skip reading if you're not up to date with the series.  If you're an urban fantasy fan and like an action packed story with a strong female heroine then I'd definitely recommend you give the first book Urban Shaman a try though.

I really do wish I'd read this series in the correct order, I have a feeling that Joanne has done a lot of growing to get to where she is today and I'd like to have seen that happening (I'm going to be checking that by reading the earlier books but am going to leave it a few months so that I can hopefully forget any spoilers I picked up by reading this one).  I thought she was a great main character, she is obviously still learning about her abilities and it appears that she has struggled to come to terms with the new supernatural world that she has found herself in but she is doing a great job of it.  Joanne was a very realistic character and I enjoyed listening to her voice as she tells the story.

There are also a lot of interesting side characters who I'm looking forward to getting to know more about.  Billy added a lot of comedy to the story and I enjoyed watching him & Joanne work together but it was also nice to see him with his wife and family too.  One of my favorite characters was Coyote, he seems to hold his cards quite close to his chest but I'm hoping to see more of him and find out some of his secrets in future books.  Gary and Morrison were both interesting characters and ones I'd have liked to have seen more of but I get the feeling that they've both played major roles in previous stories.  C.E. Murphy has created a detailed world but I felt like I was missing out on some important information by picking up the series so late in.  I'm looking forward to investigating the world more fully in the future and think I'm going to become a big fan of this series by the time I've caught up.

Source: Received for review from publisher via NetGalley