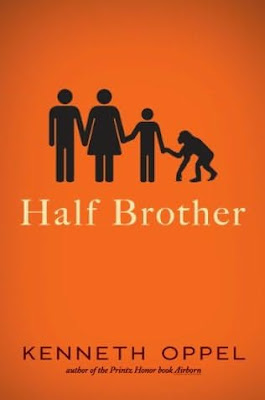 We are the weirdest family in the world.

For his thirteenth birthday, Ben Tomlin gets an unusual present.  A baby chimpanzee called Zan.

Ben's dad is a hot-shot behavioural scientist, and Zan is part of a new experiment to find out if chimps can learn language.  But 'Project Zan' turns their family life upside-down.  For Ben, it's the beginning of an extraordinary relationship with his new half brother.

Though he's being raised as a human child, Zan is still a chimpanzee.  His chimp's instincts and rapidly-growing strength make him unpredictable, yet he remains heart-breakingly vulnerable in the human world.  And when the experiment starts to go wrong, only Ben can save him.

Half Brother is a story of tremendous excitement which asks big questions about family, humanity and love - and describes one of the most unforgettable friendships in fiction.

Review:
Ben's parents are both scientists but he is shocked when they announce that they are adopting a chimpanzee so they can try to teach it sign language.  He isn't keen on the idea and really doesn't want to have to move across the country to be nearer the university that is funding the experiment either.  When Zan arrives Ben is told to think of him as a younger brother, Zan is to be raised as a human child and the whole family must be involved along with several students from the university.  But what will happen to Zan if funding for the experiment runs out?

I have to confess that I was nervous about reading Half Brother, the idea of raising a chimp in a human family didn't sit right with me and I wasn't sure if this was a story I would enjoy.  There were a couple of things at the beginning of the book that made me really uncomfortable and I almost didn't continue reading but I have to say I'm glad I pushed through and gave the story a chance.  Both Ben and Zan stole my heart and this ended up being an incredibly emotional read that I thoroughly enjoyed.

When Ben first finds out that his parents will be bringing home a chimp and raising him as Ben's brother he isn't happy.  He doesn't like the idea of having to move to another part of the country and is worried about what his new classmates will think of him and his family.  When Zan first arrives he is determined to have as little to do with him as possible but it doesn't take long before Zan's big brown eyes and sweet nature start to grow on him.  He soon falls in love with his new brother and becomes very protective of him.  I loved watching the relationship develop between the two of them and found it sweet watching them together.  Watching Zan's progress as he grows older and starts learning sign language is fascinating, especially when you find out that the story is based on two real experiments with chimps that were carried out in the 70's.  Some of the things you will learn about animal experiments that have been held in the name of science are truly horrific.  I know humans are capable of some despicable acts but there is something that makes it even worse when it is against defenseless animals and done supposedly for the greater good of mankind.

Ben's father insisted on treating Zan like a member of the family and raising him so he thinks of himself as human but as a scientist he has always managed to keep emotions out of the equation.  This isn't so easy for Ben to do so when the experiment starts getting bad press and the money starts to run out Ben is worried about what will happen to Zan in the future.  This was where the story became completely heartbreaking.  It's hard to go into much detail without giving spoilers though so you'll have to read the book to find out what happens and how things turn out for both Zan and Ben.

Alongside Zan's story we also get to watch as Ben starts his new school and tries to fit in and make friends, this part is very much a coming of age story.  I found it interesting to see that as much as Zan was learning to become human Ben was picking up qualities that chimpanzees have in the wild as he tried to become the alpha male at school.  I did find 'Project Jennifer' - where Ben approaches trying to win Jennifer's heart as some kind of experiment - was a little odd but I think considering his background this was probably quite a natural way for Ben to look at things.

Half Brother is a book that raises all kinds of issues regarding testing on animals and animal cruelty but it never forces opinions down your throat, instead it gives you all sides of the story and allows you to make up your own mind.  It will also make you think about love, family and the rights of those who aren't able to stand up for themselves.  A thought provoking and powerful read that will take you through all kinds of emotions Half Brother is a book I'd thoroughly recommend, I guarantee you will fall in love with Zan.  This is the first book I've read by Kenneth Oppel but it definitely won't be the last.

Source: Thanks to RHCB for sending me this book for review