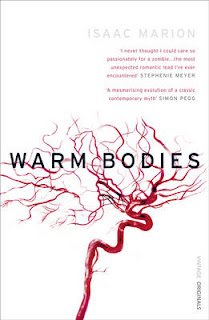 "R" is a zombie.  He has no name, no memories and no pulse, but he has dreams.  He is a little different from  his fellow Dead.

Amongst the ruins of an abandoned city, R meets a girl.  Her name is Julie and she is the opposite of everything he knows - warm and bright and very much alive, she is a blast of colour in a dreary grey landscape.  For reasons he can't understand, R chooses to save Julie instead of eating her, and a tense yet strangely tender relationship begins.

This has never happened before.  It breaks the rules and defies logic, but R is no longer content with life in the grave.  He wants to breathe again, he wants to live, and Julie wants to help him.  But their grim, rotting world won't be changed without a fight...

Review:
R is in pretty good shape for a zombie, he has grey skin and smells bad but still has all of his body parts so is a lot better off than many of his friends.  He has no memory of his life before he died, he doesn't know his name and doesn't even know how long he has been a zombie but he does know things used to be different.  He gets to experience snippets of life through his victims - when he ingests their brains he also gets to live through some of their memories - and he wants to be able to feel things again.  When he goes out to hunt with some of his fellow zombies he experiences memories of Julie after eating her boyfriend.  He becomes fascinated with her and decides he doesn't want to eat her so instead he protects her and takes her home with him.  With everything against them can R and Julie beat the odds and find a way for the living and the dead to live together?

I have to confess I didn't know much about Warm Bodies when I borrowed it from my friend Lyndsey.  I don't think I would have started reading it if I'd realised that it was a zombie romance and that fact did affect my enjoyment of the story.  I couldn't get over the fact that a human could fall for a proper brain eating zombie - particularly one that had killed her boyfriend.  The idea of kissing a rotting body quite frankly turned my stomach and was almost enough to make me stop reading.

Having said that there was something so compelling about Warm Bodies that I had to finish reading, I just needed to know what would happen to both R and Julie.  I never thought I'd be able to relate to R but he is a surprisingly likable character and one that grew on me despite the odds.  I think I would have preferred it if the romance had been removed and instead R and Julie had become friends but that is more down to personal taste than the way the story was written.  If you can look past that fact then I'm sure you'll find the book a really enjoyable read.

The story is witty and well written and makes you think about the value of life and things that you take for granted.  It is written from R's perspective which helps you to relate to his character but I think it would have benefited from seeing some things from Julie's point of view to help see her motivation and feelings towards R.  Isaac Marion has created a realistic dystopian world where there are very few remaining humans and the ones who are left are forced to live in fortified towns to protect them from the zombies.  The zombie attacks are written in great detail so I don't think this is a story for the squeamish but I thoroughly enjoyed the guts and gore.  Warm Bodies is definitely original and although not quite to my taste I'm sure it is a book that a lot of people will love.  If you're looking for something different to read then it would be well worth giving this one a try.