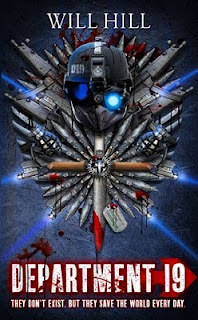 I was really excited to be invited to a launch party for Will Hill's debut novel Department 19 at the HarperCollins offices last week.  I went up to London early and met with Lynsey (from Narratively Speaking) for an afternoon of shopping in Foyles.  It was lovely to see her but unfortunately she was attending a different event so couldn't make the launch party.  After a bit of drama on the underground I eventually met up with Jenny (from Wondrous Reads) at Euston so we could travel to the event together.  I was fully expecting to get lost on the way to the HarperCollins offices but thanks to some very easy to follow directions from Geraldine we found them with no problems (in fact we were almost an hour early).  On arrival at the offices we were issued with really cool name badges (giving us level D2 clearance for the event!) and a Department 19 pack filled with all kinds of goodies.  Jenny and I spent some time staring in awe at the very impressive reception while we were waiting for more people to arrive (I didn't take any pictures but Jenny has posted one in her event report, link below)

When we were shown up to the ﻿4th floor for the event where HarperCollins had laid on a lovely spread of drinks and nibbles for us to attack while we were mingling (I was impressed that I managed to stick to my diet and avoid digging in!).  It was lovely to catch up with some of the other bloggers who were there and also to finally get to meet some of the publicists who I have been emailing for months now.  I was also lucky enough to be able to spend a bit of time chatting to Will, his editor Nick and a couple of the bloggers.  I had quite a few questions about the sequel to Department 19 and I was quite surprised by how much information Will was happy to share (although there are still a lot of things I didn't feel quite brave enough to ask!).  I'm happy to discover that Matt is going to have a role in the sequel (we weren't told that outright but as Will said that Matt is the character who is most like him and Matt spent most of Department 19 in a coma I've jumped to my own conclusions!).  I did try begging to read the sequel now but Will is still in the revision process and not even Nick has been allowed to read it yet so I didn't have much luck there unfortunately.

It was soon time to sit down and we got to watch the Department 19 trailer (you can watch it above if you've not already seen it) before Alison introduced Will and Nick for a Q&A session.

I made quite a few notes about what was discussed, the following is in my words & if there are any mistakes it is down to not being able to read my terrible writing!
The Q&A session was finished off with a sneak peek at the newest video created as part of the Department 19 viral campaign.  Unfortunately they couldn't get the sound working on the night but that's probably a good thing as I'm sure I'd have embarrassed myself by jumping out of my skin (yes I'm one of those people who watches horror movies thinking "any second now something bad will happen" and I still have to climb down from the ceiling after the bad guy jumps out - my friends all laugh at how easy it is to make me jump!).  You can watch the video yourself here but make sure you have the sound turned on - it really is better that way!

After watching the video it was time for us to get our brand new very shiny copies of the Department 19 hardback (which releases on the 31st March) signed by Will and spend a bit more time catching up with everyone.  I think I ended up leaving at about 9pm and walked back to the tube station with the 2 Darrens before we all went our separate ways to come home.  It was a fab evening and I thoroughly enjoyed myself!

It wasn't until I got home that I had a proper look in the goodie bag we were given and I was very excited about the contents.  It included posters, postcards, a patch but the highlight was a fantastic Department 19 memory stick.  The memory stick was loaded with some great extras like the family trees, a diagram of the base, a guide to vampires and some deleted chapters that I was very happy to read!  Some of this content is available to download on the Department 19 website so make sure you check it out for yourselves.

I'd like to say a massive thank you to everyone at HarperCollins for inviting me and for arranging such a fab party!  Thanks also to Will for being so friendly and not getting too intimidated when we were hounding you with questions :o)  If you haven't already got Department 19 on your wish list you really do need to add it now!  It's a fantastic debut and I can't wait to get my hands on the rest of the series - check out my review here for more information.
Who Was There:
Alison, Geraldine, Mary, Nick, Sam & Tiffany - HarperCollins - Spill the Ink Event Report

Mark - My Favorite Books
Rhys - Thirst for Fiction - Event Report
(I'm not sure if there were other bloggers there who I didn't get a chance to talk to but let me know if I missed your link & I'll add it for you)
at 01:34