Don't forget that all comments on posts with the Earth's Children logo made before Midnight GMT on the 8th April 2011 will get you entered into my international giveaway to win a book of your choice from the Earth's Children Series!  See this post for more information. 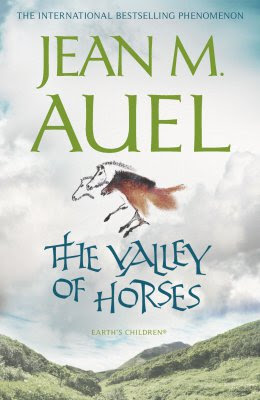 The second novel in Jean M. Auel's magnificent epic of life on the glacial continent of the last Ice Age, when two kinds of human beings, Neanderthal and Cro-Magnon, shared the earth.

An unforgettable odyssey into awesome mysteries, a novel that returns to the exotic, primeval world of The Clan of the Cave Bear - and the beautiful Ayla, as she leaves the safety of the Clan who raised her and sets out alone on an epic journey of discovery.  A hostile land of glacial cold, terrifying beasts and intense loneliness awaits her, and her need for human companionship and love remains unfulfilled.

But in the Valley of Horses she finds refuge and contentment.  There, fate brings her a stranger, Jondalar, and Ayla is torn between fear and hope - and carried to an awakening desire that would shape the future of mankind.

Earth's Children Series:
The Clan of the Cave Bear
The Valley of Horses
The Mammoth Hunters
The Plains of Passage
The Shelters of Stone
The Land of Painted Caves

Review:
In The Valley of Horses we follow Ayla as she sets out on a journey to try and find people of the "Others" (the Cro-Magnon race she was born to).  Although she doesn't want to leave the Clan (the Neanderthals who raised her) she wants to follow her adopted mother Iza's wishes and find a mate of her own.  After a long and difficult journey with no sign of the Others she discovers a valley and a cave and decides to stay there to prepare for the winter.  Alone in the valley Ayla must use all of the skills the Clan taught her in order to survive.  Her loneliness is eased by a foal that she takes in and cares for after killing it's mother but she longs for human companionship.

While Ayla is making a home for herself Jondalar and his brother Thonolan set off on a journey aiming to reach the end of the great Mother river.  It is through the brothers and the people they meet along the way that we start to learn more about the customs and way of life of the Others.  Eventually a great tragedy will cause their paths to cross and Ayla finally gets to meet one of her own kind.

The Valley of Horses is one of my favorite books in the Earth's Children series although I still think the first book is my favorite.  Considering that Ayla is alone for over half of the book it would have been easy to find her part of the story boring but watching her fight for survival is fascinating.  We find out more about how our ancestors must have survived during the Ice Age and get to see the biggest advantage that Ayla has over the Clan that brought her up.  Unlike the Clan Ayla is very adaptable, she looks for new and easier ways to do things, in fact she has to learn new skills in order to survive on her own.  She has come a long way from the helpless child that Iza found at the beginning of the first book.  It is hard to believe that she is just 14 years old when she sets out on her own but she does still have a childlike naivety to her that can be quite refreshing.

Although it is a bit unbelievable that Ayla makes so many discoveries on her own this is used to illustrate likely ways that humans actually stumbled across these new inventions and it makes for very interesting reading.  Some of my favorite parts of the book are watching Ayla with Whinney (the foal she looks after) and later with Baby (another animal she takes in and cares for).  Her innate sense of caring and her medicinal skills help her to build a strong bond of friendship with the animals and it is only because of them that she survives the lonely three years she spends in her valley.

I also really enjoyed reading about Jondalar and Thonolan's journey and the trials they face along the way.  Through them we are introduced to several other groups of Cro-Magnon people that they meet along the way and get to see how the traditions vary between different tribes.  I loved watching the relationship develop between Ayla and Jondalar when they finally meet.  They have a lot of difficulties at first due to their very different backgrounds but the romantic in me loves watching them together.  I have to give a warning and say there are quite a lot of sexually explicit scenes in the book which is why I would only recommend it to older teens and adults.  If you're not keen on those scenes you can easily skim through them and still enjoy the rest of the story.