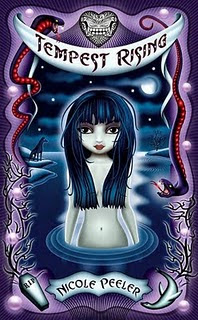 During her nightly, clandestine swim in the freezing winter ocean, a grisly find leads Jane to startling revelations about her heritage: she is only half-human.

Now, Jane must enter a world filled with supernatural creatures that are terrifying, beautiful and deadly - all of which perfectly describe her new 'friend' Ryu, a gorgeous and powerful vampire.

It is a world where nothing can be taken for granted: a dog can heal you with a lick, spirits bag your groceries and whatever you do, never - ever - rub the genie's lamp.

Review:
Jane has always been considered an outsider in her hometown, ostracised because of her mother's behaviour and a tragic incident when she was just a teenager, she has become used to the stares and whispers and tries hard to fit in and not draw attention to herself.  She keeps her nightly swims in the icy cold ocean a secret knowing that people wouldn't understand her need to be in the water.  When she finds a dead body she is unwittingly drawn into a world of supernatural creatures that she thought only existed in stories but the most shocking discovery is that she is only half human herself.  Trying to make sense of a world turned upside down isn't easy - especially when someone is murdering halflings and it looks like you're next on their list.  Luckily she has her new boyfriend, vampire Ryu, and her newly discovered supernatural friends to support her but can they find the killer before it is too late?

I'll happily admit that it was the cover that drew me to Tempest Rising and made me want to read it but I'm pleased to say that it is the writing and the characters that will make me continue with the series.  I love urban fantasy stories and have read a lot of them over the years but Tempest Rising stands out for it's range of unusual supernatural creatures - I'm not going to tell you which ones so you'll have to read it for yourself to find out - some that I've heard of and others that I've never come across in UF before.  Nicole Peeler has created a world that I want to spend more time in with characters that I'm looking forward to getting to know better.

Jane is a unique heroine with a likable voice and a sense of humor that had me laughing out loud.  She is completely out of her depth in the supernatural world that she is just starting to discover and I liked the fact that she had a vulnerable side to her and isn't just your standard kick ass heroine.  That isn't to say that she is a weak character, she is actually a lot stronger than she thinks she is and I'm looking forward to seeing her blossom even more as she comes to terms with what she is and learns about her abilities.  Love interest Ryu is a sexy but mysterious character and although I liked him and Jane together I do feel like I need to get to know him better.  I'm sure he has some secrets and can't wait to discover what they are.

There is a whole range of fun (and in some cases completely insane) characters that I'm looking forward to spending more time with.  I enjoyed the fact that there are so many unusual supernaturals but that there are also some important human characters who are there for Jane.  I wouldn't say the story is particularly fast paced but it was still a quick read with wonderful world building.  Although I enjoyed the murder mystery it was the characters and mythology that captivated me and left me wanting more.  If you're a fan of urban fantasy and like a humor filled story with strong characters and a little spice I would definitely recommend giving Tempest Rising a try.

Source: Received from Orbit in exchange for an honest review