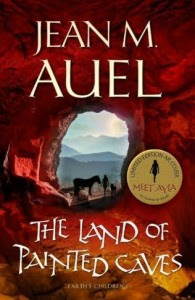 Europe is in the grip of the Ice Age.  Its harsh but spectacularly beautiful terrain supports many varieties of animal but few people.  They are Cro-Magnons - the first anatomically modern people - and Neanderthals, the other race with whom we shared that cold, ancient land.

Ayla is a Cro-Magnon child who lost her parents in an earthquake and was adopted by a tribe of Neanderthal, the Clan.  The Clan's wary suspicion was gradually transformed into acceptance of this girl, so different from them, under the guidance of its medicine woman Iza and its wise holy man Creb.  But Broud, the Clan's future leader, becomes an implacable enemy, and causes her exile.  Forced into dangerous isolation, she eventually finds her soul mate and fellow Cro-Magnon, Jondalar.

Their epic journey across Europe is complete and Ayla and Jondalar join his people in the region now known as south-west France.

Settling into the rhythm of life in the Ninth Cave, the couple find much pleasure in their baby daughter and in being reunited with friends and family.  Ayla plays a vital role in the area of healing: her knowledge of plants and herbs, gleaned from her days with the Clan, strikes awe in her new tribe.  They are also both impressed by and wary of her uncanny affinity with long-time companions, the mare Whinney and Wolf.

But, torn between her desire to concentrate on her new child and the rigours of her training as a Zelandoni acolyte, Ayla finds her relationship with Jondalar moving into stormy waters.  Can she manage to balance her sense of destiny with her heart?

Earth's Children Series:
The Clan of the Cave Bear
The Valley of Horses
The Mammoth Hunters
The Plains of Passage
The Shelters of Stone
The Land of Painted Caves

Review:
This is such a hard review for me to write.  I've spent the last 10 years waiting to get my hands on this book and I spent a good chunk of February & March re-reading the first 5 books (that's approx 4,000 pages of the tiniest writing you can imagine!) so you can probably guess how much I wanted to love it.  I am so disappointed to have reached the end of the final book in the series only to be left with so many questions.  There were so many plot lines that I wanted to see tied up, stories of characters I've loved that I needed to have resolved but I guess I'm just going to have to use my imagination.  I know I probably had high expectations but when you invest so much time in a series (I've read all of the books at least 5 times) you can't help but want the best ending possible.

I knew from the last 2 books in the series to expect repetition of Ayla's entire life story and I probably found it worse because I'd only just finished re-reading the books but if things had just been mentioned once I could have forgiven it.  The fact that it was repeated every time they met new people, along with the constant reminders of Ayla's long list of names and ties was enough to drive me insane.  Especially since they met a lot of new people on their journey to look at the painted caves!  Then when it comes to the descriptions of the caves I found the first couple really interesting but by the time you hear about what felt like cave number 50 it starts to wear thin.  There are only so many times you can describe a picture of a horse (or any other animal) before it becomes dull and hard to read.  It felt more like Jean M Auel's travel diary from when she visited the caves herself than part of the story - even Ayla mentioned that she didn't want to see any more caves at one point!  It could have been so much more powerful if less caves had been mentioned.

The story is in 3 parts and I found the jumps between sections jarring, without any kind of warning you'd start the next chapter and find you'd fast forwarded 4 years (which is probably a good thing really as the book would have been even longer if we'd had to read about those lost years too).  The first time it happened I had to go back a few pages to try and work out what was going on in case I'd missed something, I even wondered if my copy had pages missing.  For the first half of the book I was annoyed that Ayla was being forced into becoming an acolyte when all she wanted was to be Jondalar's mate and have a family.  Then suddenly she completely changes her mind and decides it's what she wants after all (despite the fact that she's spent the last 3 books dead against the idea).  It just didn't ring true to her character but I wish that was the only thing that surprised me about her and Jondalar.  Other parts were so unbelievable that it was almost like reading about entirely new characters that we've never met before.

The highlight of the book for me (alongside the first couple of painted caves that were described) was the appearance of some characters we haven't seen since very early on in the series.  I was so excited when they first made an appearance and couldn't wait to hear about what they'd been up to but unfortunately we didn't get to see as much of them as I hoped for.  Another thing seriously missing was the Clan - we didn't meet a single Clan member in the whole book which really shocked me.  I honestly expected that they would have made contact with some of the local Clans especially as this was something they were discussing in The Shelters of Stone and The Land of Painted Caves ends approximately 7 years later!  Surely at some point in those 7 years Willamar would have gone on one of those trading missions he is so famous for?  I also could have screamed at the fact that every time Ayla opened her mouth someone would comment on her foreign accent.  Even Jondalar's family and people she knew well were reminded of how far she must have travelled every time she spoke, seriously I'm sure the novelty would have worn off, at least for the people she has been living with for years.

Although I didn't hate this installment it is definitely my least favorite book in the series and it could have been so much better.  I'm still very sad to reach the end and have to say goodbye to these characters.  I know I'll re-read the series again in the future, I tend to pick it up every few years when I want an old favorite to fall back on.  What remains to be seen is if I pick this one up again or if I finish my next read through at The Shelters of Stone.