Review: Dead, Undead, or Somewhere in Between - J.A. Saare 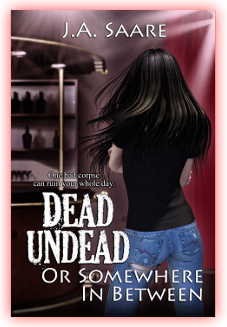 No one knows better than Rhiannon Murphy that one bad corpse can ruin your whole day.

She left behind the flash and sass of Miami for the no-nonsense groove of New York City, eager for a clean slate and a fresh start.  A bartender by trade, a loud mouth by choice, and a necromancer by chance; she managed to keep her nifty talent hidden from those around her - until now.

The deliciously good-looking vampire, Disco, knows her secret.  When he strolls into her bar to solicit help investigating the mysterious disappearances of his kind from the city, Rhiannon discovers he's not the kind of person that appreciates the significant of the word no.

But in a world where vampires peddle their blood as the latest and greatest drug of choice, it's only a matter of time before the next big thing hits the market.  Someone or something is killing vampires to steal their hearts, and unlike Rhiannon, this isn't their first stroll around the undead block.

Rhiannon's Law Series:
Dead, Undead, or Somewhere In Between
The Renfield Syndrome (August 2011)
The Ripple Effect (2012)

Review:
Rhiannon is a necromancer who can see and talk to ghosts but she works hard to keep this ability hidden wanting to have nothing to do with the supernatural world.  Her secret isn't as well kept as she thought it was though and vampire Disco knows what she can do.  He needs her help to investigate the strange disappearances of other vampires in the area and he isn't going to take no for an answer.  Rhiannon may not want to learn more about her abilities or get involved with the supernatural community but it doesn't look like she has much choice in the matter.  She'd best learn quickly if she is going to have any chance of surviving.

It took me a long time to get around to reading this book but I wish I'd picked it up sooner.  Rhiannon is a great heroine, she is feisty, smart and totally able to stand up for herself.  She is quite defensive and prickly and it took me a while to warm up to her completely but once you know a bit more about her background it is easy to understand why she acts the way she does.  I enjoyed watching things develop between her and Disco although I really would have liked to learn more about him.  He definitely has me intrigued though and I'm looking forward to seeing more of him in the next book.

I really liked watching Rhiannon develop her abilities with the help of another necromancer Goose.  It was fun seeing the two of them together and watching him slip past her defences.  She doesn't find it easy to trust but it seems like she has found a good friend in Goose and I hope we see more of him.  I'm also looking forward to learning more about Disco's vampire family, I'm intrigued about how they all met and I definitely want to find out more about Paine.

The story moves along at a nice pace and this was a quick and easy read that I would recommend to urban fantasy fans.  Be warned there is a major cliffhanger though!  I'm not usually a big fan of cliffhangers but although this one knocked me sideways it has left me desperate to get my hands on the next book.  Perhaps it's a good job I waited so long before I read this one as I only have a few months to wait for The Renfield Syndrome!

Source: I won this copy in a giveaway that the author Jamie Saare did on her Twitter page