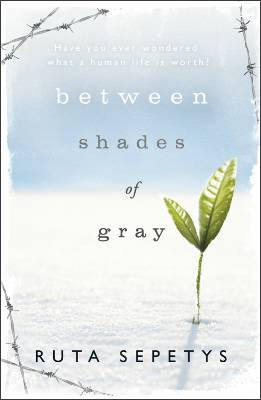 Have you ever wondered what a human life is worth?  That morning, my brother's life was worth a pocket watch . . .

One night fifteen-year-old Lina, her mother and young brother are hauled from their home by Soviet guards, thrown into cattle cars and sent away.  They are being deported to Siberia.

An unimaginable and harrowing journey has begun.  Lina doesn't know if she'll ever see her father or her friends again.  But she refuses to give up hope.

Lina hopes for her family.
For her country.
For the future.
For love - first love, with the boy she barely knows but knows she does not want to lose . . .
Will hope keep Lina alive?

Set in 1941, Between Shades of Gray is an extraordinary and haunting story based on first-hand family accounts and memories from survivors.

Visit Ruta Sepety's website or the Between Shades of Gray website for more information.  I had to include the book trailer below because I think after watching it you'll find it impossible not to want to read the story.  I will warn you to have tissues to hand though, this is the first book trailer that has ever made me cry!

Review:
Lina is just 15 years old when her whole family are captured in the middle of the night by Soviet guards.  Along with her mother and younger brother she is about to face the most difficult journey you can imagine.  Forced into packed cattle cars with other innocent civilians they soon find themselves on their way to a Siberian work camp.  They will face conditions that most would find impossible to survive but throughout their ordeal they manage to keep hope alive.

It's been nearly a month since I read Between Shades of Gray but I still can't get Lina's story out of my head. Just thinking about the book brings a lump to my throat and tears to my eyes and I don't know if I can find the words to tell you just how amazing this story is.  When I think of WW2 I automatically think of Hitler and the Jewish concentration camps.  I know horrific crimes were committed and millions of people were killed.  What I didn't know so much about was the atrocities that took place under Stalin's rule.  I've heard next to nothing about the millions of people who were deported from Lithuania, Latvia, Estonia & Finland and taken to concentration camps in the Arctic Circle.  For me reading this book was like discovering a hidden side to history and I can't tell you how important I think it is for this story to be told.

Author Ruta Sepetys has done intensive research into the concentration camps, she has spoken to survivors (including her own family members) and has used their stories to show the brutal treatment the prisoners received.  I'm not going to tell you this book is easy to read because it isn't.  In fact at times it is completely heartbreaking and I'd strongly recommend keeping tissues to hand while you're reading.  Please don't let that put you off reading it though because despite showing the absolute worst that humanity has to offer the story also shows you the best.  The love and friendship between Lina's family and the other prisoners is extremely moving, even when food is scarce and times are hard they stick together and watch out for each other in a way that gives you hope for the future.  We need to learn from the mistakes made in our history and make sure nothing like this can ever happen again.

I know my review hasn't done this book justice so if you're undecided about whether you should read it please, please watch the book trailer above or on the Between Shades of Gray website.  If that can't convince you this is a must read book then nothing can.

Other Reviews:
Mrs. V's Reviews
If you have reviewed this book on your blog please leave a link to your review in the comments & I'll add the link here.