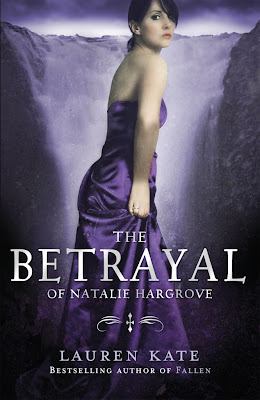 Natalie Hargrove would kill to be her high school’s Palmetto Princess. But her boyfriend Mike King doesn’t share her dream and risks losing the honor of Palmetto Prince to Natalie’s nemesis, Justin Balmer. So she convinces Mike to help play a prank on Justin. . . one that goes terribly wrong. They tie him to the front of the church after a party—when they arrive the next morning, Justin is dead.

From blackmail to buried desire, dark secrets to darker deeds, Natalie unravels. She never should’ve messed with fate. Fate is the one thing more twisted than Natalie Hargrove.

Cruel Intentions meets Macbeth in this seductive, riveting tale of conscience and consequence.

The Betrayal of Natalie Hargrove is due for release in the UK on January 6th 2011 but it looks like Amazon UK already have it in stock so you might be able to spot it in the shops early too.

Review:
Natalie is obsessed with being crowned the next Palmetto Princess and wants her boyfriend Mike to be her Prince.  She has worked hard to make sure she is the most popular girl in school so she will be chosen but Mike's lack of interest isn't going to help him win votes.  Mike has competition for the role of Prince in Natalie's enemy Justin and Natalie will do whatever it takes to stop Justin taking the crown.  When a prank goes horribly wrong and Justin ends up dead Natalie is going to be forced to take drastic measures to ensure that she doesn't lose everything she has worked so hard for.

The Betrayal of Natalie Hargrove is a modern re-telling of Shakespeare's Macbeth but as I've not read the original story I can't really compare the two.  I have to be honest and say that this book and I just didn't get along.  Perhaps it's because I'm not familiar enough with Macbeth to understand all of the references but my main issue was the fact that I just couldn't stand the main character.  I don't think I've ever come across a heroine I disliked as much as Natalie Hargrove.

She is self centred and utterly obsessed with becoming the Palmetto Princess, it is the only think she cares about and she doesn't want to talk or even think about anything else.  Every single thing that she says or does has been thought out carefully in advance to make sure she will gain something from it.  Although Justin's death was an accident the way Natalie behaved afterwards was appalling and made me think she deserved everything she had coming to her and then some.

Although we do get some insight into why Natalie was so obsessed with proving her popularity I didn't feel that it excused her behaviour in the slightest.  Just because she grew up on the wrong side of town and used to be poor before her mother re-married doesn't give her the right to act as if the world owes her a favor.  For her everything is about being rich and popular and it doesn't matter who she has to climb over or betray to get what she wants.  She reminded me a lot of a spoilt child throwing a temper tantrum to get her own way.

Her boyfriend Mike has always been rich and popular so he doesn't see what the big deal is when it comes to being the Palmetto Prince.  He doesn't understand why it is so important to Natalie and really can't be bothered with the whole thing.  At times I felt quite sorry for him but then he'd do or say something that made me think he brought it all on himself.  Justin was probably the most interesting character for me but unfortunately we don't get to see much of him apart from in the memories of others.  The whole issue of his death was sad but it was a tragic accident and had Natalie or Mike been thinking clearly and just come clean at the beginning then the ending could have been very different.  As it was I didn't like either of them enough to really care what happened to them and I spent most of the book hoping that they'd be charged with murder!

There was something about the story that kept me reading though, I wanted to see how it ended and if Natalie and Mike would be punished (not so much for the prank but for their behaviour and cowardice afterwards).  I have to say that the ending wasn't what I was expecting but it did feel like they got off lightly under the circumstances.

I think if you've read the original tale of Macbeth you would probably enjoy this one more than I did.  I would also say that if you're interested in reading about the popular kids at school and seeing the lengths they are prepared to go to earn that popularity then again you'll probably enjoy it.  It isn't something I'm interested in and I'm glad that I didn't have to suffer through the whole homecoming dance / prom King & Queen thing at my school when I was younger.  I really like Lauren Kate's Fallen which is a book I'd highly recommend, the writing was as good in The Betrayal of Natalie Hargrove but it was the subject matter I wasn't keen on.  I'm looking forward to continuing the Fallen series though and will be reading more of her books in the future.

Source: Thanks to RHCB for sending me this book for review