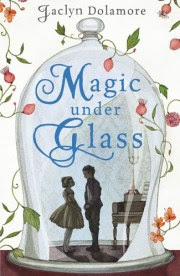 Nimira's life takes an unexpected turn when she's hired by the mysterious Mr Hollin Parry to accompany an exquisite piano-playing automaton.  But Nimira's happiness with her new lifestyle is short-lived.  She soon discovers that the spirit of a handsome young fairy gentleman is trapped inside the machine's stiff limbs.  As they gradually fall in love, they become enmeshed in a plot to save the fairy realm from a ruthless gang of sorcerers - a battle that risks their very lives.

Review:
Nimira has been working in a music hall and earning a very low wage so when she is offered a well paid job by sorcerer Hollin Parry she jumps at the chance.  He wants her to sing along with an automaton who plays the piano, she isn't the first person he has offered the job but the others have always left believing the automaton is haunted.  When Nimira first sees the lifelike automaton she can understand why the girls who came before her were nervous but she doesn't believe it could really contain a ghost.  However, she soon discovers that a fairy prince is trapped inside and as they find a way to communicate she becomes determined to find a way to set him free.  All is not as it seems in Hollin Parry's mansion but is there anyone who would be willing to help her and how does she decide who she can trust?

Magic Under Glass is one of those novels that had huge potential and could have been brilliant but unfortunately didn't quite live up to my expectations.  That isn't to say it's all bad though, I loved the descriptions of Lorinar and especially Tiansher where Nimira grew up.  Jaclyn Dolamore has a beautiful way with words that makes it very easy to picture the places she is describing and she has created a world I wanted to know more about.  However, although I can picture the world I don't feel like I know very much about it's inhabitants.  I wanted to know more about both the fairies and the sorcerers, there is a lot of background politics going on but I never felt like I had the full story which was disappointing.  I know there is going to be a sequel and I will definitely be reading it but I can't help feeling that if this novel had been fleshed out a bit more I would have loved it.  The ending felt rushed to me and we weren't given enough of an ending for me to feel satisfied.  In some ways it felt like my copy was missing half of it's pages.

Nimira was a likable main character, she is treated very badly by the locals because she is different and I liked the way she was prepared to stand up for herself.  She knew what she wanted and was determined to get it and it made a nice change to read a story where the girl gets to rescue the guy and not the other way around.  I felt for bad for Erris - it must have been awful for him being stuck inside the automaton - but because of his limited communication I didn't really feel much of a connection with him and didn't get to know him very well.  I wanted more of his history and to know how he ended up trapped but we didn't get an explanation for that.  I have high hopes that we'll get to know him much better in the sequel though and from what I saw towards the end of the book I think I'll really like him.  I guess because we don't get to know Erris well I found it difficult to believe that he and Nimira had fallen in love within such a short space of time.  I could understand her wanting to help him but I just didn't believe they were madly in love, I would have liked a stronger romance between them.

I will definitely be reading the sequel but I wish I'd waited until Magic Under Stone was available before I read this one.  I think I'd have been less disappointed by the ending if I could have gone straight on to the next book.  Like I said at the beginning of my review this story has a lot of potential and I'm sure a lot of people would really enjoy it, I'm keeping my fingers crossed that the next book will be even better!

Source: This book was given to me by Becky from The Bookette, thanks Becky!

Other Reviews:
The Bookette
If you have reviewed this book on your blog please leave a link to your review in the comments & I'll add the link here.