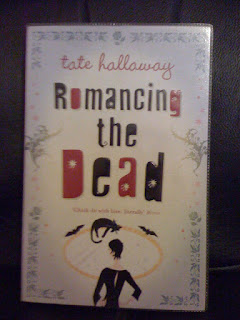 Planning a wedding can be a real pain in the neck - when you're marrying a vampire.
Especially when said vampire - the wickedly handsome Sebastian Von Traum - goes missing.  And Matyas, his half-vampire/all-attitude son, turns up.  It's not like Garnet is used to an easy life, but having recently escaped the clutches of Vatican witch-hunters and the FBI, she was quite looking forward to settling down.

No chance of that though, unless she finds Sebastian.  Plus she needs to get someone to cover her shift at the occult bookshop, make sure Micha, the sexy new member of her coven, feels welcome and ditch the stray dog which seems to be following her.  But Lilith, Garnet's inner goddess, has got other ideas...

The Garnet Lacey Series:
Tall, Dark & Dead
Dead Sexy
Romancing the Dead
Dead if I do
Honeymoon of the Dead

Sebastian and Garnet have just got engaged but with Garnet's track record that doesn't mean everything is going to go smoothly.  She is still struggling with jealousy issues, hating the fact that Sebastian has ghouls (people he feeds from) but not wanting to become his main food source.  She is also nervous about moving in with him & worried about what the future will hold - with him being an immortal vampire & her being a human who will age.

Sebastian has talked Garnet into starting a new coven - something she has been very wary of doing since her coven was slaughtered by the Vatican witch hunters.  This introduces a whole host of interesting characters - including the gorgeous Micha.  When Sebastian disappears Garnet isn't sure what to think especially with Matyas back on the scene.  They have to team up to try and find out what has happened & form an uncomfortable truce.

I enjoyed this installment of the series & am looking forward to seeing where the story will take Garnet next.  I'd say the plot was a bit more predictable than the previous 2 books but I still enjoyed it & there were some things that took me by surprise.  I was disappointed we didn't get to see too much of Sebastian in this one but it was interesting to see the relationship between Garnet & Matyas developing and I think the coven are going to add interest to future books in the series.  Overall this wasn't my favorite book in the series but was still enjoyable & I'm looking forward to reading the next book.