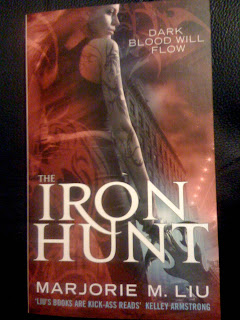 The last of her kind, a warrior awaits the call.
During the day, Maxine's tattoos are her armour and she is invincible.  At night they peel from her skin to take on forms of their own, leaving her human and vulnerable - and showing themselves to be demons sleeping beneath her skin.  But these demons are the best friends and bodyguards a woman could have.

And Maxine needs bodyguards.  She is the last in a line of women with power in their blood, trained to keep the world safe from malignant beings who would do us harm.

But ten thousand years after its creation, the prison dimension that kept the worst of these from us is failing, and all the Wardens save Maxine are dead.  She must bear the burden of her bloodline and join the last wild hunt against the enemy.

Review:
Maxine is the last in a long line of female warriors who have been protecting the world for centuries from demons.  The demons have been held in a prison dimension for thousands of years but there have always been a few who manage to escape and walk among us by taking over human bodies.  Maxine's family fight these demons (who they call zombies) and their powers are passed down from mother to daughter.  Maxine is protected by 5 demons who she affectionatley calls "the boys" who are magically attached to her body in the form of tattoos during the day but who come to life at night leaving her body vulnerable.

The prison is becoming weaker and where only the less dangerous demons inprisoned in the outer edges of the prison could break through before Maxine now finds she has more powerful enemies to contend with.  It appears that the prison is about to fall completely and the only thing standing between us and hell on earth is Maxine.

I was hooked on The Iron Hunt from the very first line of the prologue "When I was eight, my mother lost me to zombies in a obe-card draw."  Well that definitely had my attention!  The story is told in first person from Maxine's point of view and we get to join her on a voyage of discovery as she learns about her heritage.  At times this could be a little confusing but I enjoyed learning things alongside the heroine and it made it easy to relate to the feelings she was experiencing.

There was an interesting mix of characters - I absolutely loved "the boys" and I'm curious to find out more about Maxine's human boyfriend Grant who has some very interesting musical abilities that I hope we will get to find out more about.  I'm also curious Tracker and interested to see what part he may have to play in the series.  I thought The Iron Hunt was a promising start to a new series and I'm looking forward to finding out what happens in the next 2 books!

Source: Thanks to Orbit for sending me this review copy