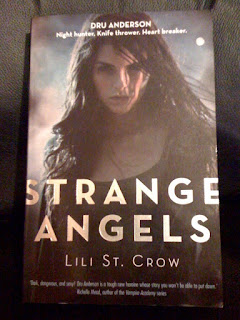 If Dru can't survive until sunrise, the game's over...
Dru knows that The Real World - peopled with ghosts, suckers and zombies - is a frightening place.  She's ready to kill first and ask questions later, so it's going to take her a while to work out who she can trust.

Dru Anderson has been 'strange' for as long as she can remember, traveling from town to town with her father to hunt down things that go bump in the night.  It's a weird life, but a good one - until in an icy, broken-down town, a hungry zombie bursts through her kitchen door.  Dru is going to have to use every inch of her wit and training.  Can she stay alive long enough to fall for one - or both - of the guys hungry for her affections?

Review:
Dru's and her father are hunters who travel from town to town killing creatures of the night - monsters from The Real World that most unsuspecting humans have no idea exist.  The story starts with Dru starting at yet another new school which she thinks is pointless as they'll just be moving on again in a couple of months.  Fed up with being the new girl she decides to skip school and meets Graves - the local goth boy - but she has no real interest in starting a friendship with him.

However, when her father doesn't come home from a hunt, Dru finds herself up against zombies, vampires and werewolves (or suckers and werwulfen as Dru calls them) with no one to help her.  Graves comes to her assistance like a knight in shining armor but they are both out of their depth.  When Christophe appears on the scene they aren't sure if he can be trusted but as desperate as they are they have no choice but to accept his help, at least temporarily.

I really enjoyed Strange Angels and can't wait to continue reading the series.  I loved Dru's snarky sense of humor and the fact that she is a strong heroine who will do whatever it takes to survive.  She knows her way around weapons and has trained to deal with the supernatural but when she realises she is out of her depth she is willing to accept that she needs help.  I also loved Graves - he does his best to take care of Dru despite the fact that he has been thrust into a supernatural world he had no idea existed.  I found the fact that he admitted his fears and wasn't always strong made him a more realistic character.  Christophe is another interesting character but one that we don't get to know as well as I was hoping, I'm guessing that he is going to play a big part in the series though.

Being the first book in a series there was obviously a lot of world building going on but I thought Lilith Saintcrow did this really well, explanations were smoothly slotted into the storyline without taking away from the plot.  The action was fast paced and there were some fantastic plot twists that helped build the tension levels and I was swept along on the ride with Dru.  Although this could be read as a stand alone novel & a lot of loose ends were tied together we are left with quite a cliff hanger that is going to make the next book Betrayals an interesting one to read.  I'd definitely recommend this to fans of young adult urban fantasy novels and I think the story would appeal to both teens and adult fans of this genre.

Other Reviews:
Darlyn & Books
The Bookette
If you have reviewed this book on your blog please leave a link to your review in the comments & I'll add the link here.