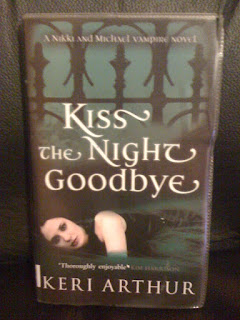 Private Investigator Nikki James wants nothing more than to pass the Circle's strict entry exams so she can plan her wedding to Michael Kelly.  But when one of the testers attempts to kill her, she realises buying a wedding dress is the least of her worries.  Especially when Michael is shot and kidnapped.
The trail leads her to the ghost town where Michael once killed a murderer.  She's not surprised to discover that Weylin Dunleavy, the brother of that long-ago sorcerer, has set out to raise his brother's spirit from hell.  Nor is she truly surprised to discover that a barrier of magic surrounds the old town, leaving her to battle Dunleavy with only her wits, strength and the one psychic gift she cannot fully control.  The one thing that does surprise her, the one thing she cannot accept, is the fact that Michael no longer remembers who she is...

The Nikki and Michael Series:
Dancing with the Devil
Hearts in Darkness
Chasing the Shadows
Kiss the Night Goodbye

Review:
This is the 4th and final book in the Nikki and Michael series & I'd strongly recommend that you read the series in order.  Although I won't give spoilers for Kiss the Night Goodbye in this review it will be impossible not to include things that may spoil the previous books so if you're new to the series I'd suggest you read my review for Dancing with the Devil.  This is a series I really loved so I'd definitely recommend you check it out!

Now that Michael has finally agreed to let Nikki join the Circle so she can join him on his missions but first she has to pass her training course.  Nikki has worked hard to improve her fitness and her psychic abilities but it she doesn't pass the entry exam then her upcoming wedding will have to be put on hold.  The exam seems to be going well - until one of the instructors tries to kill her that is.  It appears that one of Michael's enemies has managed to infiltrate the Circle and they are investigating when Michael is kidnapped.

With Michael being held hostage in a psychic dead zone Nikki is forced to go and find her man.  They are facing their most deadly enemy without their strongest weapons.  Worse still Michael doesn't even remember who Nikki is.  Nikki is going to have to keep her wits about her if she is going to get them through this - especially if she wants to do it in time for their wedding.

I really enjoyed the other books in this series and Kiss the Night Goodbye didn't disappoint.  If anything this last book in the series was even more action packed and there was still plenty of romance despite Michael's memory loss.  I love the growth we have seen in both of the characters throughout the series and although Keri Arthur has tied up the ends of the series well I would love it if she would bring out more adventures with Nikki and Michael in the future.  I almost didn't want to finish the book as I wasn't ready for their story to end.  I'd definitely recommend the series & I know it is one I'll be reading again in the future.